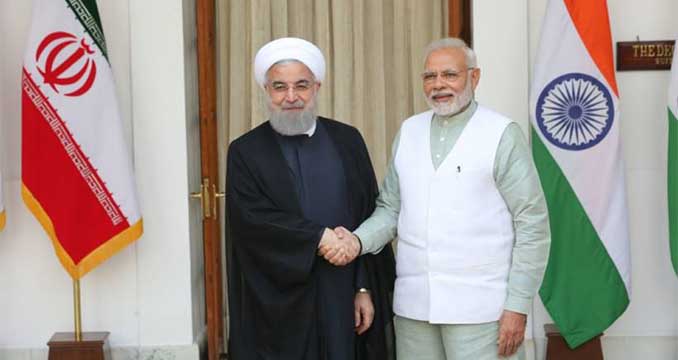 India slowly but steadily is emerging as a strong economy and is well on her way to becoming the second largest potential market after China in the world. For a long time, India had the status of a developing third world country. Gone is that status. Now India is an emerging economy which has the potential to offer enormous investment opportunities.

The changed status is causing a change in perception about India in the region and in the rest of the world. Countries from the region and beyond are seeking to strengthen ties with India amid shifting geostrategic relationships within Asia. One of those countries is Iran, a Middle Eastern country. India- Iran ties are gradually strengthening.

Interestingly, Iran is in a strong competition with Saudi Arabia and Turkey for the sphere of influence in the Middle East. The region is in disarray and disturbed, given the long-standing complex civil war in Syria and a huge crisis in Yemen. The Syrian civil war is the world’s bloodiest conflict since 2011.  It may escalate into a regional war in the Middle East.

Meanwhile, the Shia majority nation Iran is a key adversary of the nuclear power Israel. The two countries’ relations are strained and deteriorated. On 10 February 2018, a military clash occurred between Iran and Israel. The clash added a new dimension to the Syrian war. For the first time, Iran challenged Israel directly.

Israel is India’s key ally in the Middle East.  But India is not supporting Israel or Iran. That is easily understandable. Geopolitics is not guided by a nation’s likes and dislikes- it is guided by the national interests of a country. And so if one country supports an ally on an issue, it is not obligatory for the country to support the ally on all other issues.

Pertinently, good relations between India and Iran, including Afghanistan enable them to isolate Pakistan diplomatically. And in case of war in the region, India can use its influence with the Afghan and Iranian governments to block global supply routes to Pakistan.

One aspect of India- Iran relations is that they share cultural and linguistic ties for thousands of years.  Mughal structures are still in existence from Lahore to New Delhi.  The famous Taj Mahal is a prime example. During his recent visit to India, Iranian President Hassan Rouhani said, “We, in the Islamic Republic of Iran, believe that the people of Iran and India have had friendly relations with each other. We have had (close) cultural, economic and other relations with each other since the last many centuries.”

When the 1979 revolution occurred in  Iran, India-Iran relations soured because Pakistan supported Iran while India supported Iraq during the Iran–Iraq war in the 1980s. However, at the end of the Cold War in the 1990s, bilateral relations between India and Iran improved. That lead to the signing of a defense cooperation agreement in 2002 between the two
countries.

Meanwhile, despite good ties, the two nations are not on the same page about the NATO presence in restive Afghanistan. While India supports the presence, Iran opposes it. In spite of the differences, diplomatic and economic ties between the two countries have improved. India is a major importer of Iranian oil.

What should not be forgotten is that the USA sees Iran as an adversary and India as a strategic ally. The US and India came closer in 2015 when they signed a 10-year defense agreement that opened the way for huge US military hardware sales to India in exchange for India providing the US military access to its harbors, airfields and bases.

However, US relations with Iran over the last decade have deteriorated to an alarming level. In 2006, the US led an effort at the UN to impose international economic sanctions on Iran. The latter had refused to suspend its uranium enrichment program.

Joint Comprehensive Plan of Action (JCPOA) was signed between Iran and the five permanent members of the UN Security Council and the European Union in 2016 and Iran agreed to scale down its nuclear program. In reciprocity, the UN sanctions against Iran were finally eased and India began increasing its purchases of Iranian crude oil. Indian Prime Minister

Narendra Modi had a bilateral meeting with President Hassan Rouhani in Iran in May 2016. The summit was aimed at improving their bilateral relations. Last week, Mr. Rouhani was in India to renew the ties. Keeping in view the economic and security concerns, India may not join the US and its allies in imposing sanctions on Iran. India favors dialogue and negotiations.

Meanwhile, Israel is also strategically important for India. The Jewish country supplies sophisticated military technology to India. Therefore, both Israel and Iran are very important for India’s national interest. Such a situation should make India remain neutral in its relations with both the Middle Eastern countries. India cannot afford to offend either of these two nations.

In such a situation, the mutual efforts by India and Iran to develop Chabahar port is of great significance. The port will give both the countries better access to landlocked Afghanistan, Central Asia and Europe, bypassing the nearby port of Gwadar Pakistan.

Moreover, for Iran, a fully developed Chabahar port will connect South Asia with Central Asia, giving Iran an upper hand in the scenario and in the region. The situation can allow Iran to geopolitically enhance its sphere of influence in the region and beyond.

And with India rising to become even a bigger energy customer in near future, the port of Chabahar can enable Iran to get India into a long-lasting arrangement. However, the two countries need to do more to cement their bilateral relations. There are rising security threats which can be countered through cooperation and coordination.