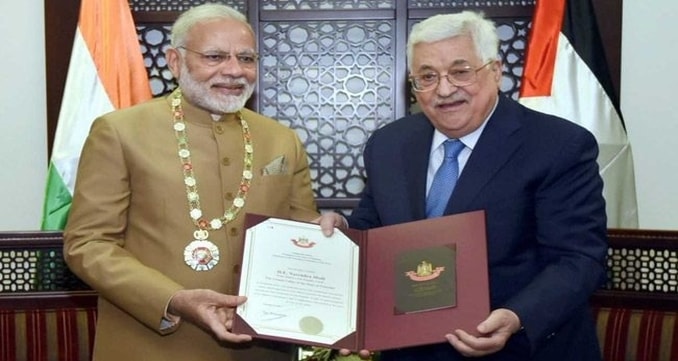 Indian Prime Minister Narendra Modi   visited  Palestine on 10 February 2018 during his three-nations tour to the Middle East. Despite India’s historical support for the Palestinian cause, no Indian prime minister has
ever visited Palestine. Modi is the first Indian Prime Minister to visit the country and by doing so he made a new page in world history. The high level diplomatic visit should go a long way in strengthening India-Palestine ties.

In fact, the visit seems to have strengthened the ties between India and Palestine and has paved the way for a better understanding and improved relations between the two countries. On landing in Palestine, Modi received a warm embrace from Palestinian president Mahmoud Abbas . Later on Modi was conferred the ‘Grand Collar of the State of Palestine’ by  the President, recognising his key contribution to promote relations between India and Palestine.

The “Grand Collar” is given to foreign dignitaries like Kings, Heads of State/Government and persons of similar rank.
Prominent among the previous awardees of the Grand Collar have been King Salman of Saudi Arabia, King Hamad of Bahrain, President Xi Jinping of China .

The commendation reads, “In recognition of his wise leadership and his lofty national and international stature, and in appreciation of his efforts to promote the historic relations between the State of Palestine and the Republic of India; in acknowledgement of his support to our people’s right to independence and freedom so that peace prevails in the
region.”

Moreover, Mahmoud Abbas said,
“We rely on India’s role as an international force of great standing through its historical role in the Non-aligned Movement and its increasing,
power in strategic and economic levels, in a way that is conducive to a just and desired peace.”

Recently, Palestine’s Ambassador to India, Adnan Abu Alhaijaa  told India Today that Modi could play an important role in restoring normalcy to the trouble torn  region of the Middle East.

Voicing support to the two state solution to the conflict, Modi said, “Friendship between India and Palestine has stood the test of time. The people of Palestine have shown remarkable courage in the face of several challenges. India will always support Palestine’s development journey.”

Modi government has de-hyphenated Israel-Palestine ties. Earlier, all Indian visitors  used to visit Israel and Palestine together. However, Modi
confined  the visit to just Palestine. He went through Jordan, not Israel, straight to Ramallah- Palestine.

De-hyphenation  of ties  symbolises a foreign policy being conducted on merit . There is no appeasement in favour of any country. It is simply based on national interest and statesmanship.

Moreover, the visit emphasized India’s support to Palestine’s  Right to Self Determination . It is no rocket science to understand that Modi’s visit has treated Palestine as a separate state . He has sent a  message across the world that the people of Palestine have their own identity . The
signing of agreements with president Abbas is a proof of solid support to treating and recognising Palestine as a state.

Then, the visit was aimed at deepening the huge bilateral agenda, including cooperation in the areas of health, IT, tourism, youth affairs, sports and agriculture.

The Palestine visit is also seen as Modi’s balancing act. That is good. Modi visited Israel last year and some weeks ago Israel’s premier Benjamin Netanyahu was in India. The two countries have come very close to each other. Therefore, to balance relations, Palestine visit was a diplomatic necessity for Modi government.

And then, according to B. Bala Bhaskar,  joint secretary (West Asia and North Africa) in the Ministry of External Affairs, India has offered continuous support to the Palestinian cause at various global fora. In the UN General Assembly in December 2017, India voted against US President Donald Trump’s unilateral recognition of Jerusalem as Israel’s capital.

Visiting Palestine and supporting the cause of the Palestinians can prove a useful move in the domestic politics for Modi and his  Bharatiya Janata
Party. Although there is no harm in that, there should be a real
improvement in the level of living of the Palestine sympathetic electorate
in India. Optimistically, Modi government should never change its stand regarding the Palestinian issue. It should provide a new platform to the
Palestinian cause .