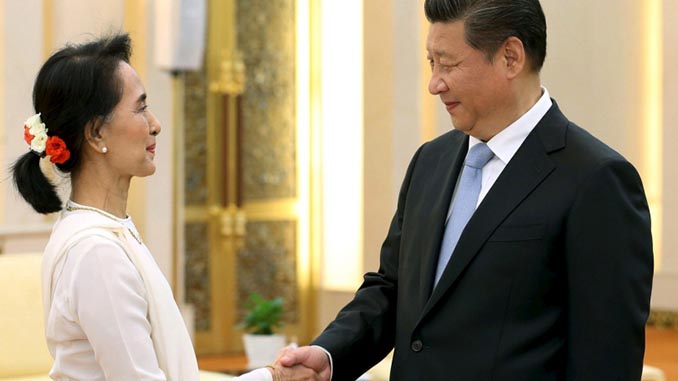 China has profoundly influenced the geostrategic environment in Asia and the Pacific. Myanmar retains a crucial position in emerging Chinese regional order. The direction of their bilateral relations will have a considerable impact on Chinese visions and regional aspirations. Beijing’s political, military and economic clout will be instrumental in shaping and organizing relations in Southeast Asia and its peripheral regions. Myanmar is one of its historic and oldest allies in the neighborhood. Myanmar was the first country to recognize and establish diplomatic relations with China after the Chinese Communist Party assumed power in 1949. Although there were minor lapses and fluctuations in bilateral relations, Overall relations between the two countries were largely cooperative and harmonious during the past six decades. Their relations gained renewed momentum after the military coup and its subsequent consolidation of power in 1962. Since then China was providing it with economic, military, political and diplomatic support as Naypyidaw was virtually cut off from the international community, especially from the West due to the nature of its military regime and its abysmal human rights records. Before the democratic transition in 2010, China had enjoyed an unprecedented level of influence on Myanmar, as the survival of the military regime was largely dependent on the support from Beijing. Till now China is its major development partner, the source of its investment, capital, commodities, technology and military equipment.

Myanmar is important to China for its geostrategic location in reference to its access to the Indian Ocean as well as the country’s sandwiched position between South and Southeast Asia. China wants access to the Indian Ocean for its landlocked and remote Southwestern region, especially for the province of Yunnan. Myanmar has paramount importance in Chinese Maritime Silk Route Initiative to enhance its trade and commerce with the rest of Asia, Africa and Europe. If Myanmar allows the Chinese to use their ports for Peoples’ Liberation Army Navy (PLAN), it will significantly increase their power projection capabilities in the Bay of Bengal and Indian Ocean region. Proposed BCIM corridor under the Kunming Initiative can further facilitate trade and communication between the countries. Myanmar is also endowed with huge natural gas reserve; Chinese investment and technology to exploit and utilize this untapped resource would benefit both China and Myanmar. Naypyidaw is also an important linchpin in India’s Action East policy to extend its influence in Southeast and East Asia as well as countering growing Chinese influence.

Geopolitical dynamics in Asia is in transition for the emergence of China as a great power and of the United States’ pivotal decision of rebalancing to Asia-Pacific. Obama’s opening to Myanmar has far-reaching effects in Sino-Myanmar relations. External pressure both from China and America will define its foreign policy trajectory. Naypyidaw’s reintegration with the international community would help it pursuing an independent foreign policy course.

Until recently, Myanmar was of trivial importance to America and its allies.  The Struggle for political influence between China and the United States in Myanmar is getting intensified since the civilian government took office in Naypyidaw. Japan has recalibrated its policy towards Myanmar to contain and roll back Chinese influence. Myanmar is also an important linchpin in India’s Action East policy to extend its influence in Southeast and East Asia as well as countering growing Chinese influence.

Now relations between China and Myanmar is at crossroads because of its warming of relations with the West and Beijing’s corruption and controversy over some infrastructure projects in Myanmar. Sino-Myanmar relations is in a somewhat tensed and problematic trajectory after the suspension of the construction of Myitsone Dam and criticism over its underpayment and negligence of local Burmese labor force working in Chinese companies and projects. In addition to, traditionally Chinese officials have worked with the military regime in Myanmar for more than five decades; in comparison, the current administration of Suu Kyi has no such previous interactions and personal level relations with the Chinese. These factors have influenced the dynamics of current relations between China and Myanmar. People of Myanmar is very concerned of their sovereignty, territorial integrity and autonomy; overreliance on and increased influence of China contributed to a complex situation of apprehension, disillusionment and discomfort.

The current administration of Myanmar is trying to establishing a balance between the competing powers regarding its core national issues. Naypyidaw’s reintegration with the international community would help it to pursue an independent foreign policy course. Myanmar has every interest in avoiding geopolitical rivalry between China and the United States.

In light of the long history of cooperation, cultural and religious affinity, convergence of mutual interests regarding economic development, combating terrorism, environmental change to name a few, it would not be an exaggeration to say that, in future Myanmar’s relations with China will be smooth but its current rapprochement with the United States would reduce its dependence on Beijing. Total neutrality is not possible as it is deeply entrenched in PRC’s geopolitical orbit, but Naypyidaw will follow a relatively non aligned foreign policy in terms of geopolitics; nonetheless, their extensive economic relations will continue to flourish. Although we might see reduced cooperation in strategic level, China would certainly remain its main development partner.

China must resolve some of its bilateral issues with Myanmar, such as growing trade deficits, domineering tendencies of Beijing and lack of trust to enhance the healthy appearance of their relations.