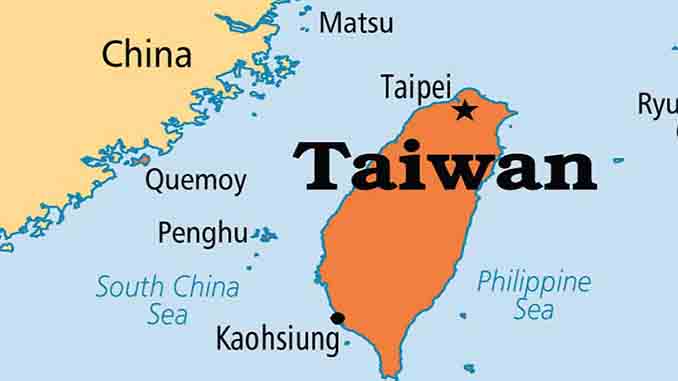 China maintains that Taiwan was always a part of China and it would unify Taiwan, if necessary by military means. War can break out over Taiwan in many forms. China-Taiwan relation is structurally unstable. Taiwan is the main flashpoint in Sino-American relations. A shooting war can take place between the two giants regarding the status of Taiwan.

For China, the loss of Taiwan is reminiscent of its century of humiliation. A major part of Chinese foreign policy is centered on Taiwan. First, Beijing will attempt to reunify Taipei by economic integration and hardcore diplomacy; if they fail then they would resort to military power.

A war between China and Taiwan could involve the United States. According to the Taiwan Relations Act of 1979, America would view any military action by China against Taiwan with “grave concern”. During the 1995-1996 Taiwan Strait Crisis, the United States showed its resolve for Taiwan.

China is still militarily weaker than the United States and it is not in a position to Challenge the US Navy in a war. American Navy can still cut off China from the rest of the world. If a war breaks out, Washington’s naval blockade would cause tremendous damage to the Chinese economy. Washington controls all of the strategic sea lanes, so China would not able to transport oil using the maritime routes for its industry and military machines.

Beijing’s strategic patience will end when it will have the technological, military and economic wherewithal to prevent the United States from intervening in a conflict over Taiwan. The leadership in Beijing are aware that Taiwan has been improving its military capabilities to prevent reunification.

America follows a foreign policy of American primacy. Like Madeline Albright once said, “If we have to use force, it is because we are America; we are the indispensable nation. We stand tall and we see further than other countries into the future”. The US will want to control the first and second island chains to dominate the Eurasian landmass. We know, Taiwan is a part of that first island chain.

Taiwan is located near the belly of China. It is also very near to Japan. The US military considers Taiwan as an unsinkable aircraft carrier. During a war between the US and China, Washington can station military assets and deploy military planes from Taiwan into the heart of the Chinese mainland. So the point is, if China tries to take Taiwan, the United States will not easily back down for the island’s enormous strategic importance and China always fears this.

China has a huge number of nationalist population. If Beijing makes the case that it will annex Taiwan then the leadership in China would not have any other options other than war. They cannot back down from that point. If they somehow fail to take Taiwan, the Chinese Communist party will not survive. The nationalist would surely take control of the country. So, it is a very risky business.

Another small point, China needs strategic airlift and hundreds of surface ships to capture and occupy an island like Taiwan but Beijing has not yet achieved much progress in the area of strategic airlift. China is working hard on Anti-Access/Area Denial (A2/AD) capabilities to prevent the United States from intervening in a conflict over Taiwan.

In recent years, cross-strait balance of power has rapidly shifted in favor of China. Beijing’s military and economic capacities would continue to grow in the foreseeable future. To show force and resolve, People’s Liberation Army (PLA) has already deployed 1600 ballistic missiles aiming at Taiwan.

Time is still not ripe for China to take Taiwan. A more capable China in the future might try to alter the existing status quo in the Taiwan Strait. Many foreign policy experts around the world argue that, for avoiding nuclear war and maintaining good relations with China, the United States should gradually secede Taiwan to Beijing. According to some Pentagon analysts, a stronger China can prevail in a war over Taiwan.