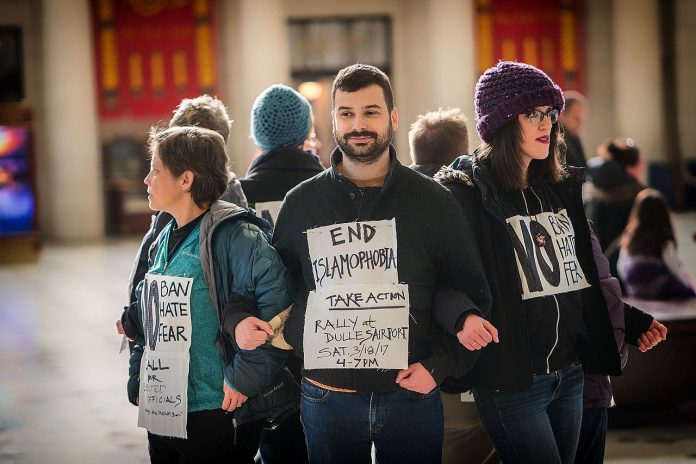 Etymologically, Islamophobia, as the combination of the words “Islam” and “Phobia” which derived from Phobos, known as “the god of horror” in ancient Greece, in its simplest sense, can be defined as “the fear of Islam”. Although different definitions from several disciplines have been introduced so far, Islamophobia, in general, especially on the psychological level, expresses the instinct of “fearing from Islam and the Muslims”.  In this respect, Islamophobia also intersects with the concept of “xenophobia”, in the context of social psychology. Because Islamophobia, developed in the Western world, is strengthened as an antipathy against another social group that differs in terms of cultural and ethnic characteristics; it thus brings about the development of a security reflex in the context of protecting “the purity of the Western society” and culture from the threats of the others. From this perspective, it is accepted that Islamophobia and Xenophobia not only feed but also reproduce each other symbiotically.

Based on their reflections on practice rather than on their conceptual content, besides Xenophobia, the interpretations that compare Islamophobia with Anti-Semitism, which dominated Europe’s socio-political atmosphere as a decisive factor in the first half of the 20th century, are also noteworthy. According to the approach of John Esposito and İbrahim Kalın, it is well known that the discriminatory/exclusionary politics against the Jews in Europe’s past, the hate crimes derived from it and the traces of the racist acts still alive in the collective memories of the peoples. Moreover, today, that suffering period is rejected by the West, both by using legitimate legal channels such as the Nuremberg Court and by the process of punishment in the conscience of the society. Esposito and Kalın, who reminded that one of the essential building blocks of Western ideology is not to make any concessions on fundamental rights and freedoms in order not to discriminate anyone regardless of their ethnic origin and belief, says that there should also be similar sensitivity to Islam and Muslims.

With the end of the Cold War, the global system transformed from bi-polarity to a unipolar hegemonic structure. The process of change and transformation, called globalization, has begun to gain momentum, and the gap that emerged as a result of the lagging of ideological configuration has been globally replaced by identity politics. It is seen that this identity politics has two major transformative effects on the West-Islam tension into Islamophobia through social and political channels. First, sociologically, the European identity and lifestyle adaptation problem of the Muslim masses living in Europe in the social sense and the internal tensions created by it have come to the forefront. Secondly, in the political field, as the victorious side of the Cold War, the West invented a new imperial ideology built on the idea of creating a new rival within the establishment of the new world order. According to Samuel Huntington and his major work “The Clash of Civilizations”, that rival should be the Islamic Civilization.

Migration, as one of the most important socio-political issues of today’s world, is at the same time one of the most important social sources of Islamophobia. The increasing Muslim migration to the West, especially from the second half of the 20th century, brought about the erosion of the European character from the cultural point of view of the continent’s native residents. The growing mass of Muslim settlements in Europe, which began with the movement known as labor migrations, brought the necessity of living together with a foreign identity which is not culturally European in the continent. In this respect, the phenomenon of immigration within the field of social interaction, the facts like “coexistence”, “multiculturalism”, “global citizenship”, “immigrant rights” in the context of the “assimilation-integration debate” started to be discussed in academic and political environments as part of “European identity-Islam identity” conflict. Especially in terms of immigrant rights, non-European Muslim migrants are discriminated and marginalized on the ethnic and religious origins, which is in itself a legal issue in today’s world.

Islamophobia, which is a marginalizing attitude towards Islam and Muslims, turns from being a social instinct and a categorical opposition element to a hate speech with the effect of the September 11 attacks on Twin Towers. In addition, the militarist political rhetoric was developed by the US after the 9/11 attacks, first by the Afghanistan operation and then during and after the Iraqi War. The most important effect of that militarist rhetoric was to persuade first the American society and most of the European society to the reality of the idea of the clash of civilizations. Anti-Islamism in Western political circles widely spreaded through using concepts like “Islamic Terrorism”, “Radical Islamist Terrorist Organizations”, “War on Global Islamic Terrorism” “Islamofascism”, especially in political debates in the mainstream media. In a very simple equation in the Western world, “Muslim equals a potential terrorist” and the perception of “Islam equals terror” started to be widely produced. Especially after the 9/11 attacks, all the socio-political developments have begun to place an opposite point of view of philosophy that presents cultural differences as a source of richness and diversity in Western democratic thinking.

There is no doubt that the basic rule of living together is not to alienate the others in respect of religion, faith, culture and way of life. In that context, it must be underlined that dialogue is the precondition of coexistence. Dialogue, as well as being the first step of recognition, is also the sine qua non of pluralism, which is today accepted as the basis of civilization. However, the relations of the present-day Western-Islamic civilizations suffer from the shortage of dialogue. It is clear that the reason for such a common misunderstanding between two sides, is the sharp set of prejudices produced in the historical process of both sides against each other. This often reproduces the atmosphere of intolerance, which is today the subject of a complaint, in each single event; and at the same time, it reduces the possibility of living in peace and security.