The COVID-19 pandemic continues to ravage the planet with the global death toll now close to 300,000. But the deaths seem to be concentrated in Western Europe and North America, while many countries in other geographical zones seem to be relatively spared.

Among these areas where the toll has been lower is Southeast Asia, and notably Vietnam, Laos, Cambodia, Thailand and Myanmar. As the table below shows, these five countries have until now recorded less than 100 deaths between them, and, better still, Vietnam, Laos and Cambodia have not reported any deaths at all.

This zero toll is even more remarkable in the case of Cambodia which has maintained regular air connections with China (including Wuhan, the source of the pandemic). Further, more than a million Cambodians work in labor intensive factories and live in surrounding overcrowded tiny rooms or travel in conditions of close proximity, which led to fears of a catastrophic spread of the illness. 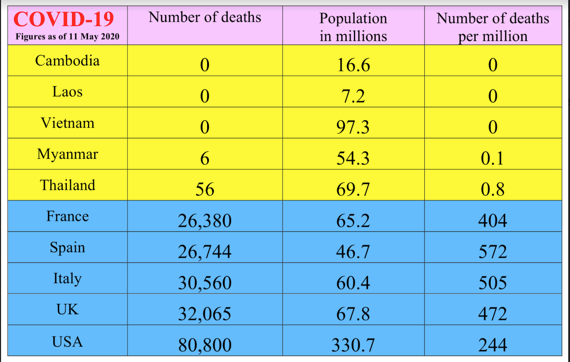 The contrast between the least affected countries (in  the yellow zone of the table) and the most affected ones (blue zone) is even more striking if the number of deaths is compared with national populations. Per million inhabitants, Thailand has only 0.8 deaths and Myanmar 0.1, compared with between 200 and 500 per million in many Western European and North American countries.

There are four possible reasons to explain this difference in COVID-19 mortality rates.

Temperature seems to be an important element to consider when measuring the ease of propagation and severity of the coronavirus. The virus seems most potent at temperatures between 10C and 15C. At the start of the pandemic in the Wuhan region of China, the temperature did not rise above 15C until March. In tropical and subtropical regions, temperatures are usually between 25C to 40C, which can inhibit the virus.

In countries where GDP per head is the highest (Western Europe, North America …), the highest mortality rates have been noted. These rich countries also have the largest proportion of old people (as a result of population ageing) as well as those who are obese (diets that are too rich, lack of exercise). COVID-19 in its most serious cases strikes the aged, who have lower levels of immunity, as well as the obese, where infection may be aggravated by other illnesses. In western countries, 80 percent of deaths due to COVID-19 are in those aged over 70, and these people often have co-morbidities. When it comes to the ‘diseases of civilisation’, the populations of the poorest countries, such as in Southeast Asia, are on average younger and in better physical condition.

Tropical and subtropical regions such as in Southeast Asia, where malaria is endemic, seem to be less affected by COVID-19 than regions with temperate climates such as those of the northern hemisphere, where malaria is practically absent.

It seems that the infectious malarial agent, a parasite called “Plasmodium” has some points in common with coronavirus, such as a genome made of ribonucleic acid (RNA). This shared point may have led to the beginnings of immunity to COVID-19 among those who have had malaria. Research is continuing into other possible similarities between COVID-19 and malaria. One potential treatment for COVID-19 that is under discussion includes chloroquine, an old malaria treatment.

4) The genetic factor of hemoglobin E

Drawing on history, geography, archaeology, ethnology, hematology and genetics can help in our understanding of public health problems.

The French doctor Jean Bernard (1907-2006), a founder of modern hematology and an expert on Southeast Asia, studied the history of the Khmer Empire and noticed that the descendants of this empire, which was at its greatest extent in the 12th and 13th centuries had, and still have, an “anomaly” in their blood consisting of the presence of the hemoglobin E in their red blood cells. Hemoglobin E seems to have been a distinctive genetic characteristic in the Khmer race in the Indochina peninsula.

Jean Bernard noted that the historical and geographical limits of this empire, which can be defined by a line joining the most distant Khmer temples, roughly correspond to the areas still inhabited by populations who carry hemoglobin E. These populations, according to Jean Bernard, are the descendants of the ancient Khmers. 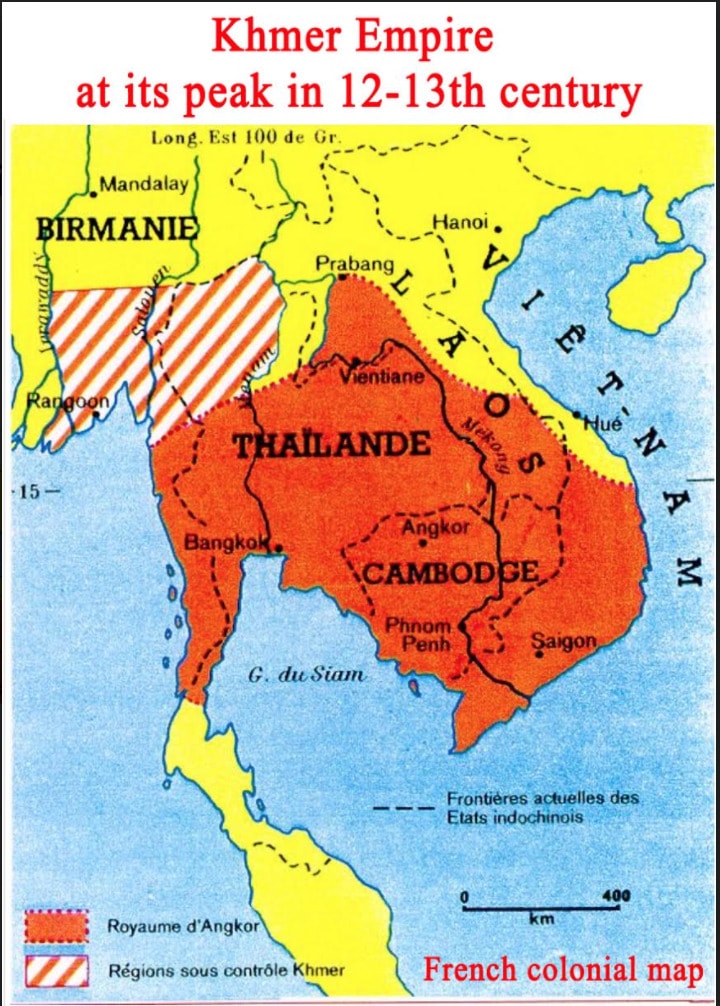 According to Jean Bernard, who was president of France’s Académie des Sciences, “The geography of Hemoglobin E and the geography of Khmer art monuments can be roughly superimposed. This is a remarkable correspondance. The limits of the ancient Khmer empire have until now been defined by archaeology. They can today be defined by hematology. The limits are roughly the same.”

The important point for us is that hemoglobin E may have given a degree of immunity against malaria.  This may have allowed the ancient Khmers to survive and prosper in the region’s vast malaria-infested zones.

The ancient Khmer empire covered modern Cambodia, and parts of southern Vietnam, Laos, Thailand and Myanmar previously known as Burma (see map). These countries occupied by the descendants of the ancient Khmers have long been able to resist malaria thanks to hemoglobin E. It is possible that hemoglobin E is also now helping them to resist COVID-19 relatively well due to the similarities between the two illnesses.