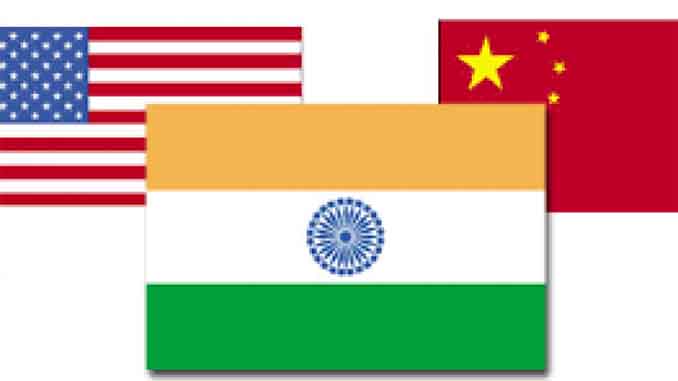 The India-China-US strategic triangle is going to be the most important defining factor in the geopolitical history of the twenty-first century. The United States is the sole superpower of the world now. China and India are rising rapidly. China is already the second largest economy in the world. It will not take too long for India to become the third largest economy in the world. Hence, the relations between these three super-states are very important for the coming world. If we can positively handle the triangular relationship between these three states, the world will be a safer place to live. A stable relationship will also usher the age of economic and infrastructural development, peace, and prosperity; not only is Asia-Pacific but also in the whole world.

Perhaps, Washington is going to adopt the strategy of offshore balancing, advocated by renowned international relations scholars like John Mearsheimer and Stephen M. Walt. The strategy relies on the coordination and support of the American alliance network in Asia to contain or check the development of China. The United States will maintain very close relations with India, Japan, Australia, Philippines, South Korea and Vietnam to use their combined military, political and economic power against China. The US will transfer its military technology and other resources to those countries to enable them to stand vis-a-vis China. However, these states alone cannot contain China successfully due to China’s huge military and economic power. That is why the strategy also needs the US to throw its own weight against China when a situation demands. Proponents of this theory think that the combined power and resources of America and its allies will be able to box in China within its own region. American pivot to Asia or rebalancing strategy is derived from the idea of offshore balancing. From this perspective, India will become increasingly important to the United States.

Sino-Indian relations will be the second best relationship in the triangle. It will not be an exaggeration to say that India and China are now two largest and vibrant societies in the Asia-Pacific region. China and India share a lot of common bonds and historical experiences. Both the countries need each other for their mutual development. On the one hand, India needs huge investment to develop its infrastructure and economy. On the other hand, China has a deep pocket — trillions of dollar waiting to be invested in its banks. The Chinese investment in India will be beneficial for both of them. India will get much need investment and infrastructure and China will get interests and profits from its investment. For example- in recent years, China has agreed to invest 60 billion US dollar in India.

India-China trade relations are considered the cornerstone of their bilateral relations. The Booming bilateral trade can positively influence the direction of overall India-China Relations. Both the countries signed and ratified a trade agreement in 1984. Under the agreement, India and China enjoy Most Favored Nations (MFN) status in their bilateral trade. There is also an agreement between them to outlaw double taxation.

Besides economics, there are other avenues for cooperation like climate change and reshaping the world economic order. The Bretton Woods System or the current economic order is favorable to the West in many ways. China and India can work together to make reforms so that it becomes an equal opportunity platform for everyone. New Delhi and Beijing also have common interests in maintaining peace and stability in Asia. Without stability, it will be difficult for the region to develop rapidly or to maintain the momentum of development. If India and China are able to work together, they can make a whole new economic as well as security architecture in the world.  If India and China have to play that role then it is extremely important for them to keep in mind the very strategic dimension of their relationship. They should try and resolve thorny issues in their relations so that they can work together in the context of that strategic dimension. A high level of trust between the two countries is necessary to achieve that objective. That is why the bilateral relationship of China and India is very important. It is also important for the rest of the world because if they can use their mutual trust and confidence to cooperate in the international arena to strengthen rules, international law and institutions; it will make the world a safer place for all of us. Therefore, the geopolitical dynamics of the future largely depends on India-China relations.

There is no way to deny that there are also some differences between India and China for example- border issues, competition for the sphere of influence, misunderstanding, the imbalance in trade and commerce, differences in culture, ideology, political system and so on. Scholars think that these kinds of differences and problems will not produce a tremendous negative impact on the overall relations between China and India because these drawbacks are not the whole picture. They are a small part of their relationship.

The China-US relationship is the most important in the world today and it will continue to be the single most important bilateral relationship in the foreseeable future. As a result, both the countries attach great importance to the development and careful management of the relationship. People around the world as of today are still concerned and worried about the policy and the rhetoric of the Trump administration. The Chinese are especially concerned about the United States’ rebalancing strategy.

The US-China trade relations have increased exponentially since Deng Xiaoping’s economic reforms. The total volume of US-China merchandise trade was 579 billion USD in 2016. In spite of growing trade and economic relations, the overall bilateral relationship suffers from increased complexity, concern, and uncertainty.  The trade rivalry between Beijing and Washington will be very serious in the coming days.

Human rights is a major issue in the US-China relations. American government, media, NGOs, civil society, and academia are critical of China’s treatment regarding religious freedom, freedom of speech, dissenters and minority groups like the Uyghurs. Many realist scholars have predicted that the US-China relations will be caught up in the Thucydides Trap. According to this theory, most of the time an established power (like America) resists, when a rising power (like China) wants more space and influence in the international system. The American policy of primacy confirms that the United States is unwilling to share its superpower status, power, and prestige with China. History tells us, the US does not tolerate near-peer competitors in the international system. A security competition between America and China will begin as a result of their conflicting visions and incompatible national interests.