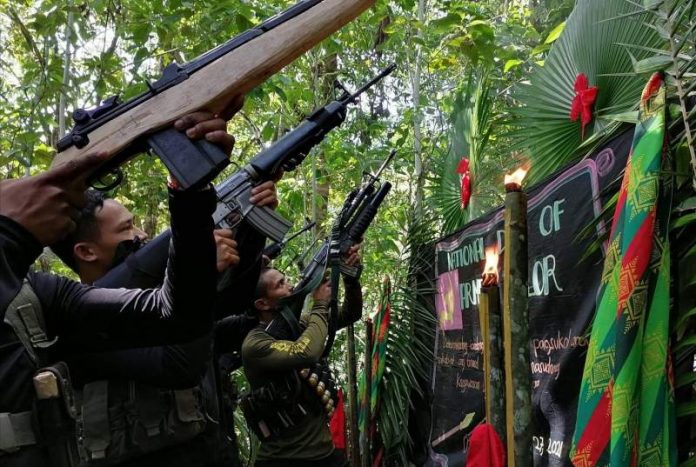 The Communist Party of the Philippines (CPP) and the associated New People’s Army (NPA) have been waging war against the Philippine government for over 50 years in what is considered to be one of the world’s longest-running insurgencies. And although the network holds deep historical and ideological affinities with Chinese Maoism, they now view contemporary China as a capitalist and imperialist power that is actively violating Philippine sovereignty using a variety of coercive economic and military means, thus making the Chinese state an adversary to be resisted.

The CPP’s most immediate enemy is the Philippine government, which they accuse of being corrupt, derelict, and beholden to foreign interests, however, the group is also attuned to the broader geostrategic context of their struggle. The communists are highly vocal in their opposition to the United States and have even killed American military personnel. The US State Department formally placed the CPP/NPA on their list of foreign terrorist organizations in August of 2002.

Washington’s influence in the country combined with its longtime political and security support for the government in Manilla has made America the traditional focus of Philippine communist anti-imperialist rhetoric. However, China’s rise in conjunction with its expanded regional military and economic presence has drawn an increased level of attention and ire from militant elements. There is some level of historical irony to this given the CPP’s origins as a movement inspired by China’s Maoist revolutionaries and Beijing’s support for the organization until it cut off assistance in 1976.

The Communist Party of China Betrays the Cause

The recent 100th anniversary of the Communist Party of China (CPC) marked a moment of strategic reflection for the Maoists of the Philippines. Through its official media organ, the CPP published a searing historical analysis titled On the Centennial of the Once Great Communist Party of China. The piece traces the CPC’s move away from its ideologically pure revolutionary origins to its corrupt embrace of capitalism and its ultimate evolution into an expansionist imperial power.

The author identifies two distinct periods in the CPC’s 100-year history: from the party’s inception in 1921 to 1976 and from 1976 to the present. After 1976, it is argued, the CPC was “completely transformed and dominated by the state capitalists and their private capitalist collaborators” and thus “abandoned the international proletarian cause.”

The piece was soon followed with a review of Xi Jinping’s centenary speech written by the Chief Information Officer of the CPP, Marco L. Valbuena, in which he claims the Communist Party of China is “bereft of a Marxist soul” and proceeds to accuse Xi Jinping of presiding over an “imperialist China” and of promoting “modern revisionist ideas.”

According to Valbuena, the CPC’s ideological “degeneration” and its accordant change in domestic behavior has also had far-reaching implications abroad, with the Philippines being on the receiving end of Chinese aggression. “Arising from the development of monopoly capitalism,” he writes, “China has now become a big imperialist bully, contrary to Xi Jinping’s claims.”

The Communist Party of the Philippines is growing quite hawkish on China, and the Chinese imperialism that spokesman Valbuena writes about is a subject of intensifying focus in contemporary CPP media discourse. This hostile anti-China sentiment has prompted explicit calls for attacks against Chinese firms operating on Philippine soil.

Valbuena told Benar News that Chinese businesses and their onsite security personnel are legitimate targets. In another statement, the CPP directed its armed cadres to “mount more frequent tactical offensives” against government forces and Chinese commercial interests using “all possible types of weapons – from rifles and command-detonated explosives, to spears and punji sticks.”

Although the CPP are avowed communist internationalists, they are hardliners when it comes to matters of national sovereignty. This impulse animates their desire to expel American and Chinese influence from Philippine soil. Accordingly, they often issue scathing critiques of Philippine President Rodrigo Duterte, a former college student of CPP founder Jose Maria Sison, for being weak on China and thus failing to adequately address Chinese maritime transgressions.

Earlier this week, the group called Duterte a “coward who does not know how to defend the country’s sovereignty and national dignity” and said it is left up to the Filipino people to “vigorously resist China’s encroachment in Philippine territorial waters and plunder of marine resources.” The statement chided the president for acquiescing to China’s Nine-Dash Line territorial claim.

Since 2016, the CPP argues, China has bolstered its position and foothold in the country, has increased its plundering of natural resources, and has rapidly expanded its naval and military presence within the country’s maritime territory. In addition, they take issue with China’s construction and militarization of artificial islands in waters proximate to the Philippines.

On this issue, the CPP celebrated the spirit of their student activists in remaining “among the stalwarts of Filipino patriotism” and continuing to play a central role in the country’s fight for freedom “amid China’s economic and military intrusions and the regime’s treachery and sell-out.”

The CPP has also frequently criticized Chinese firms operating in the Philippines for plundering natural resources and has accused them of degrading the environment. They note how some Chinese companies are involved in the “construction of mining roads and dams that are encroaching deeper and deeper into the ancestral lands of the national minorities and forests in various parts of the country.”

In response, the organization’s media arm directed militants and sympathizers to “intensify armed resistance against the expansion of anti-people mining, logging, plantation, energy and tourism operations which dispossess and displace the peasant and minority masses,” insisting that the revolutionary movement must take action to prevent the “further expansion of Chinese companies.” They placed a particular emphasis on firms that are involved in the construction of Chinese military bases in the West Philippine Sea.

The Communist Party of the Philippines is openly hostile toward China’s government, its military forces, and Chinese businesses operating in the country. Yet the degree to which the CPP’s animosity and threatening rhetoric will translate into New People’s Army operations against Chinese nationals and interests remains to be seen. This will be an issue to observe going forward as China grows more powerful and increases its regional footprint.

Lucas Webber is a writer and researcher focused on geopolitics and militant movements. He tweets at @LucasADWebber. The views and opinions expressed in this article are those of the author.

AUKUS Damages the EU, and America is Truly Back