The COVID-19 pandemic is currently imposing confinement on 3 billion people, leading to the world economy being more or less paralyzed. The purpose of this confinement is to prevent the spread of coronavirus and to protect those who are vulnerable to it – the great majority of the population. Until proved otherwise, we are all potential carriers and spreaders who have to be confined in our own interests and those of society.

My idea is to look at the other side of pandemic, that is to say the people who – most often without realising it – are not, or will no longer be, vulnerable to COVID-19. These people are immunised, or soon will be, in general without knowing it. The number of such people will increase very rapidly, even in the absence of a vaccination.

The idea is to identify this population through a serological test which detects antibodies. This is different from a test for coronavirus itself. Those who have developed immunity as reflected by their antibodies would immediately return to work, without danger to themselves or the rest of the population. From a strategic point of view, this approach would allow disrupted command structures and operating groups in all sectors to be stabilized, re-established and consolidated. A case in point would be the most exposed health workers in hospital environments.

There are currently two sorts of tests for COVID-19. The first kind are polymerase chain reaction (PCR) tests carried out by taking samples from the upper respiratory tract. Because these are based on the amplification of the genetic material of coronavirus, they allow its presence to be detected, but provide no other information.

The second sort are serological tests which require a blood sample. As well as showing whether the virus is present, this kind of test can show the presence of antibodies among people who have been in contact with coronavirus, but who have managed to eliminate it through their immune system. People with these antibodies are considered as “immunised.”

This immunised population needs to be identified because it represents a labour force that can immediately be released from confinement and put back to work. This population will come to constitute the majority because it is the result of three different processes leading to three groups of immunised people (see diagram below): 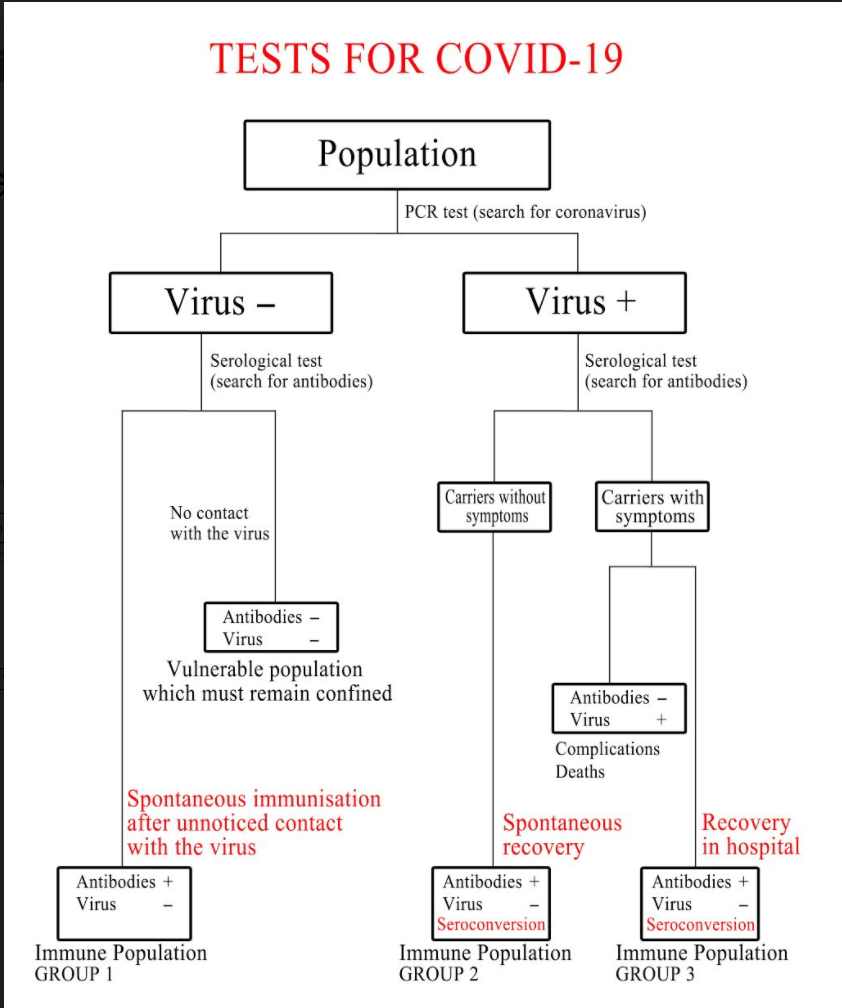 Group 1: People who have or could have tested initially negative for coronavirus (virtually everybody at the beginning). They have since been in contact with the virus but have been able to spontaneously overcome it, most often without knowing it. These people will continue to test negative for coronavirus because they have developed antibodies to eliminate the virus and prevent it from reappearing, at least for a certain period, thus enjoying what is called “herd immunity.” This is probably the largest group in the immune population.

Group 3: People who have also tested initially positive for coronavirus, but who are more vulnerable than the preceding group. These people have presented symptoms that may have required hospitalisation but are counted in the statistics as having been “cured.”

I know that production of these two sorts of tests – PCR and serological – is currently very far from being able to satisfy stated needs, which are already colossal. Necessity is the mother of invention. The world’s industrial complex can be adapted and reoriented to satisfy current and potential demand. Serological tests would allow immunological status to be established, and give people the possibility to end their confinement and return to work, without risk for themselves or those around them.

The stakes are high. We urgently need to deal with this economic waste and aberration — to say nothing of the human frustration — that the confinement of billions of people currently represents. This confinement can be noticeably reduced by definition of immunological status through serological testing, which has the potential to save the world economy from catastrophic paralysis with unimaginable consequences.

Given these stakes, the world must now use its resources to urgently produce the needed quantity of medical tests for COVID-19, before finally defeating it through the development of a vaccination.