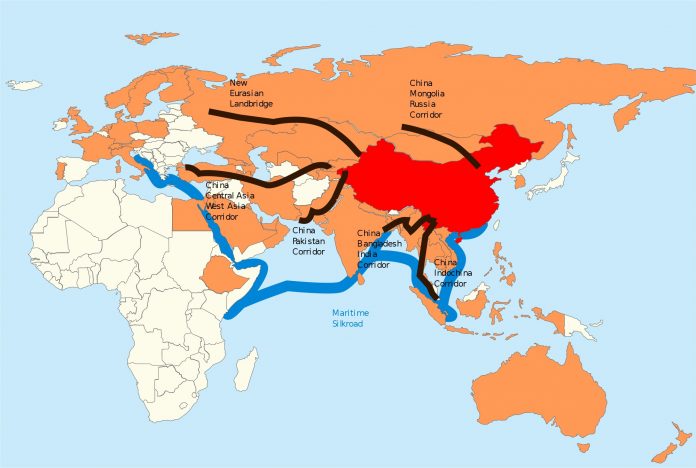 The One Belt One Road (OBOR) or the Belt and Road Initiative (BRI) is an ambitious project initiated by the Chinese president Xi Jinping. The project is aimed at connecting China with Central Asia, Europe and with the countries situated along the shore of the Indian and the Pacific Ocean. Reaching about 65 countries, the project will encompass three continents.

Basically, the BRI is a network of roads, railways, oil pipelines, power grids, ports and many other infrastructural projects- all meant to connect the Asian giant China to the rest of the world. China has planned around $1 trillion of investment in various infrastructure projects by providing loans to the countries involved at a low cost.

Announced by president Jinping in 2013, the main objective of the Belt and Road Initiative is to rejuvenate the ancient trade routes which connected Asia to Europe. Then the routes were collectively known as the Silk Road or the Silk Route.

What is China going to achieve through this very ambitious project?  China wants to expand its influence across the globe. BRI will help Beijing to achieve that goal. Indeed, the project will enhance China’s economic and strategic influence and leave it in a leadership position in the region and beyond.

By expanding China’s friend circle, the BRI will bring economic benefits to the host countries while meeting China’s diplomatic, economic and strategic purposes. Moreover, the initiative will address China’s domestic needs and will bring prosperity to the country. The demand for the industrial output will increase which will revitalize China’s economy.

The BRI is also intended to counter US influence in the global stage and to convince the world that the rise of China is not a threat to world peace. Apparently, China is creating an impression that it believes in a win-win situation for all and thus contributes to world peace and prosperity.

What needs a special mention is that the Maritime Silk Road- which is a part of Belt and Road Initiative- is implicitly intended to facilitate the operation and deployment of the People’s Liberation Army Navy (PLAN) in the Indian Ocean and beyond. How will such deployments fare at the international level, especially to the USA? Obviously, the US will see it as Chinese military, economic and strategic expansion to counter American presence. This is likely going to further sour the already tensed relations between the two major powers.

It is no exaggeration that China’s growing influence challenges the status of the US, which has been the world’s only superpower for the last three decades. The BRI is China’s way of leveraging power to become a global leader. By building ties and taking control of the global trade, China is on the right track. The purpose of the project is to secure China’s national interests. By building infrastructures and aiding the economies of the recipient nations, China is ensuring that its borders are safe and secure.

There are commercial interests as well. For China, the BRI is an effort to create economic zones outside the country. The goal is to generate demand for Chinese excess goods.

Interestingly, BRI is aimed at changing the course of the world history by casting Eurasia into the center of economic and cultural life again by breaking the dominance of maritime powers. In olden times, Eurasia as well as closely linked North African zone, in economic terms, was the axis of the world economy.

The profit generated by the exchange of goods through maritime trade and the control that maritime routes gave to European countries were unprecedented in human history. First the Portuguese and the Spanish, then the Dutch and finally the English extended their sphere of influence. Their power resulted in opening the great continental empires and involuntarily altering their traditional social and economic systems. The British Empire was the first global hegemon to command the seas. It was directly ruling one-fourth of the world’s population. Its power was enough to defend its interest anywhere in the world.

States or empires, however, could not impose their rule forever. It was partly the outcome of the politics of the maritime powers (Great Britain and the USA) and the inability of the railway, road and air transport to become a real competitor of the sea transport. Railway and road transport were significant on a regional level while for longer distances, sea transport remained the most effective way.

Meanwhile, China is in a delicate situation. In order to continue its emergence globally, it needs a peaceful environment and good or at least working relations with the US. Moreover, it needs a more powerful fleet to challenge American presence in the Pacific and India Ocean Region. For that end, China must seek new opportunities.

One such opportunity is in the form of Belt and Road Initiative. The project aims at shifting the axis of the world economy from the oceans back to the mainland and to restore the former economic, political and cultural role of Eurasia.

As per the definition of the International Relations, the features of a hegemonic power include economic and military power exceeding competitors and the control over the interstate system via international institutions. China has undoubtly met the first criterion with Asia and there is an attempt to transform the international system as well.

With a capital of 100 billion US dollar, Beijing –based Asian Infrastructural Investment Bank has been operationalized. It is supplemented by the Silk Road Fund and the New Investment Bank of the BRICS group, which will have a fund of 100 billion US dollars by 2020. International collaborations supported by China such as the Shanghai Cooperation Organization, the Boao Forum, etc., are also playing a part.

However, the American influence is so deep and considerable that it will be difficult to eliminate it in one go. It will happen gradually. In achieving that goal, China will be successful if it manages to make friends and allies. Making alliance will depend on China’s ability to persuade countries to comply with its foreign policy.

Examples from history show that earlier continental powers were not able to compete with maritime powers for two main reasons: the politics of maritime powers and the level of technology- the technology which was unsatisfactory for overcoming geographical factors.

What needs not to be forgotten is that China’s Belt and Road Initiative, attempts to feature China in such regions- South Asia, Central Asia, the Middle East; where the influence of the US has weakened. In the past, the US had launched its own Silk Road scheme which was not of the scale of the Chinese and it is still not clear what answer the US has for the BRI.

Meanwhile, China-Russia relations are improving mainly due to Russia’s isolation following the takeover of Crimea. Now due to American sanctions on Moscow and the Chinese investment and trade- Russia is increasingly becoming dependent on China.

Although India is reluctant to enter the OBOR due to China-Pakistan Economic Corridor and Beijing’s potential appearance on the India Ocean, it is still interested in the project. The reason being its lack of capital and infrastructure development.

Besides, along the route, countries such as the central Asian states, Pakistan, Iran and Turkey, could align more closely with China. Consequently, China will be in a stronger position to assert itself in global affairs. The establishment of the overland network will enable China to increase its influence into Central Asia and will allow it to secure an alternative route for its energy supplies.

The BRI can land China in a commanding position and the project can win vote and support for China in the global stage.  In fact, the international order may undergo a sea change if countries come together and accept Chinese leadership in exchange for economic gain and prosperity.

Overall, the Belt and Road Initiative is a sign of China’s desire to project power westwards across Eurasia and along the sea lanes of the Indian Ocean as far as East Africa. The BRI in fact represents China’s economic and foreign policy, which is intended to guide the behavior of countries along China’s strategies and interests. However, how will the countries getting benefited by the BRI, behave? That remains to be seen.

Meanwhile, China will have to ensure that its ambitious project does not fall to political instability and uncertainty in countries through which the project passes. For example, the Middle Eastern countries are caught in dire political crisis. It will not be a smooth sailing for China to operate the BRI in those conflict ridden lands.