The UK’s upcoming  local and devolved elections on May 6th will be the most consequential in decades, despite not involving any change to the legislature or government at Westminster. Partly this is because it will shape the political dynamics of the post-pandemic recovery, but most pressingly it could lay the groundwork for a radical change in how the union between Britain’s different nations functions. The fallout from these elections could, if mishandled by the current Conservative government, herald the end of the union itself.

England, Westminster and the Pandemic

These elections, which will cover many English local councils, mayors and police commissioners as well as elect legislatures in Scotland, Wales and London, will be a test of PM Boris Johnson’s popularity following an up-and-down ride in the polls during the pandemic. There was near constant controversy during much of this period, involving corruption scandals and at one point the highest daily death toll in the world. However, the thus-far successful vaccine rollout and a willingness to ditch Tory economic orthodoxy in favour of government spending means his personal brand seems to have survived, while culture war politics may keep his Brexit-voting coalition in place a while longer. 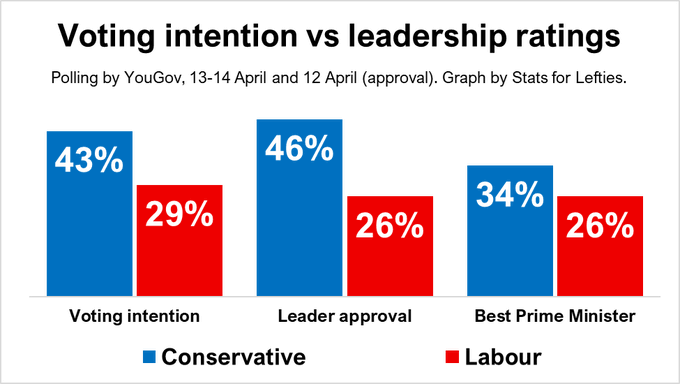 The leader of the Labour opposition Keir Starmer faces tougher challenges, with declining personal rating and the potential for a weak showing for his party overall. A year into his term as leader, Starmer will hope to make progress in winning back voters in the former Labour heartlands in the North of England which increasingly voted Conservative in 2019. After 11 years in opposition and given the perceived poor handling of the pandemic by the UK government, precedent would suggest a good performance for the opposition could be in store. However, recent polling indicates a Conservative Party which is still well-ahead in general voting intention. While predicting local election results is difficult compared to other elections, due to the nature of the voting system, indications seem to show little likelihood of a Labour breakthrough.

The Labour Party will likely claim that any return reflects the divided party that Starmer inherited and the enduring unpopularity of the former leader Jeremy Corbyn in some parts of the country, as well as a “vaccine bounce” in favour of the government. However, Starmer’s promise to unite the party has clearly not materialised, with the left of the Labour party losing faith after inner-party shenanigans such as the scrapping of an all-women shortlist for Liverpool mayor or the parachuting in of a favoured candidate to a crucial by-election. Starmer’s approval ratings have plummeted with both the public and Labour voters in recent months, while his efforts to remain conciliatory in a time of national crisis have seen him portrayed as a weak opposition leader with no clear message. Ultimately, his defenders can only blame Starmer’s predecessor for so long. 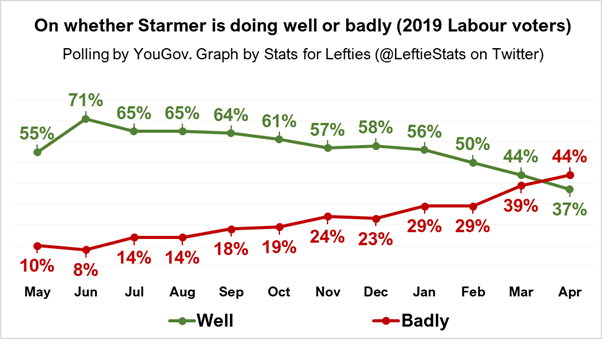 A poor showing for Labour is unlikely to dislodge Starmer, but it could severely weaken him. Meanwhile, a good showing for the Conservatives will put Boris Johnson in a strong position to weather any storms related to Brexit and the post-pandemic recovery, allowing him to remain in office for the rest of this government’s term with a large majority and loyal party. However, the most consequential elections on May 6th are not taking place in England but are instead the elections to the Scottish Parliament.

Scotland’s governing Scottish National Party (SNP) have positioned this election around two key issues. The first is around competence and the pandemic, with the SNP led by Nicola Sturgeon being generally more trusted than Boris Johnson and the Westminster government. While trust in the SNP has been dented by recent controversy surrounding a botched sexual harassment investigation into the former First Minister Alex Salmond, which brought out divisions in the once unified party, Sturgeon still remains a comparatively trusted and popular figure in Scotland. The second main issue in the election is that of Scottish independence, with the SNP and Greens pushing for a second referendum based around the argument that Scotland was pulled out of the EU against the wishes of a majority of the population. The Westminster government has thus far refused requests to hold a second referendum, and the coronavirus crisis may have dampened appetites for any such vote. However, this election has been framed as an opportunity to push the British government into accepting a renewed mandate for a referendum.

Given that voters in Scotland increasingly vote along constitutional lines, the results of this election could be seen as a dry-run for a referendum itself, with the vote total for the SNP and Greens likely to be presented as an approximation of the vote for independence itself. With some clear caveats about turnout, Labour voters, independents and the effect of any actual campaigns, this election will certainly give an insight into the overall popularity of Scottish independence. With 21 consecutive polls in late 2020 and early 2021 showing a majority in favour of independence, a strong pro-independence majority would add to the growing sense that Scotland leaving the UK is not just possible, but perhaps even likely.

The SNP-led Scottish government will certainly use a strong showing for pro-independence parties as mandate for another referendum, which the Westminster government has so far denied. Polling shows a high likelihood for a pro-independence majority involving both the SNP and Greens. The only question is likely to be the scale of the SNP’s victory, with either an outright majority or a joint SNP-Green majority. However, unionists may try to portray anything less than an outright SNP majority as a loss for independence. While such a majority is difficult under a parliamentary system which was designed specifically to prevent such an outcome, polling shows that it is perfectly possible given the popularity of the SNP and divisions among the unionist parties. Whether there is an SNP-majority or a joint SNP-Green majority we are certain to see a renewed push for independence. 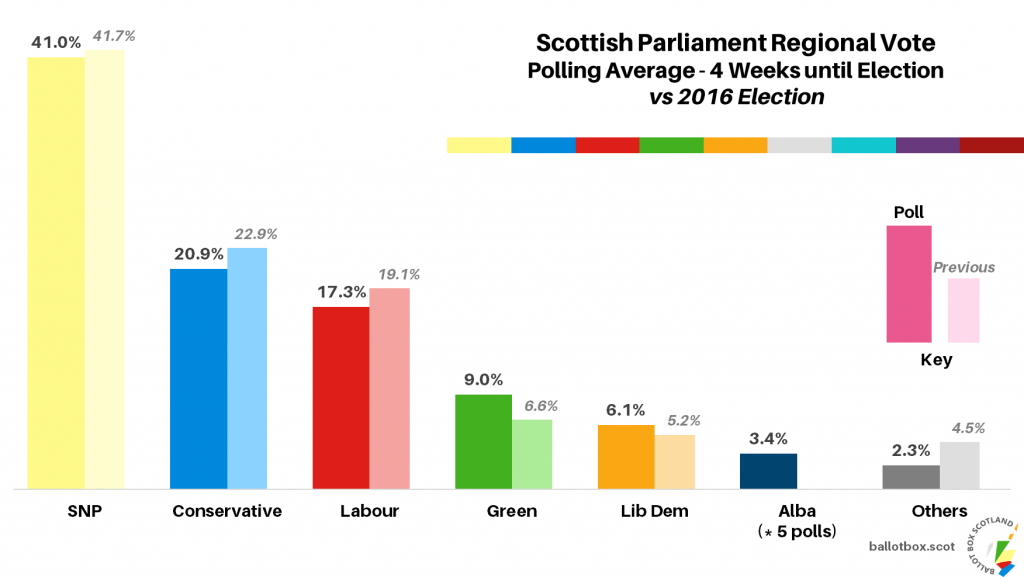 The emergence of the Alba Party, led by former SNP First Minister Alex Salmond following a high profile sexual harassment scandal and his subsequent public battles with his former protégée Nicola Sturgeon, has created a new element in the race. This party claims not to be challenging the SNP but rather serving to maximise the pro-independence vote by only standing candidate on the second regional list ballot. Whether this hurts or helps the pro-independence cause depends on complex electoral arithmetic, but at the moment both Salmond and his party are polling poorly and have already been beset by embarrassing splits on issues such as LGBT rights and campaigning, which may further alienate the public.

While Wales has a devolved government there has historically been less of an appetite for independence than in Scotland, with the nationalist Plaid Cymru polling at around 20-25% despite recent growth in pro-independence sentiment. However, this election sees the potential for growth in both the Plaid Cymru and Welsh Conservative vote, with the Labour government potentially falling to its worst result since the establishment of the Senedd in 1999. While Labour should be able to maintain control of the devolved government with the support of other parties, a poor result in a formerly strong Labour supporting country would play into the wider narrative about shirking UK-wide support for the opposition. Labour faces attacks from its left by nationalist parties in Scotland and Wales as well as the Greens and the newly formed Northern Independence Party which will contest the Hartlepool by-election, while it has also haemorrhaged votes to the Conservatives in parts of England. While younger voters are increasingly a backbone of the Labour vote, they are also more likely to support independence in both Wales and Scotland, indicating a deep structural problem for the opposition. A poor performance in Wales will only add to Keir Starmer’s woes.

London and a ray of hope for Labour

The mayoral elections in London are potentially the one piece of positive news for the opposition Labour party, with the incumbent Labour mayor Sadiq Khan leading the Conservative’s Shaun Bailey by 47% to 26%. These elections, delayed from last year due to the pandemic, are likely to return a Labour mayor by the biggest ever margin. While the Conservative’s have won in London before, with the mayoralty giving Boris Johnson the platform and name recognition needed to push on to become Prime Minister, Shaun Bailey has failed to make in-roads among voters. This huge gulf may be down to the relative popularity of the two main candidates but can also be seen as part of a longer-term trend in which Labour has solidified its vote in cosmopolitan urban centres.

Overall, these elections will provide an insight into several key trends. One is the vulnerability of centre-left parties felt throughout Europe, as the Labour opposition struggles to hold together its fraying coalition. Related to this is a geographic realignment as the Conservative party attempts to maintain its newfound success in former Labour heartlands following the ruptures of the post-Brexit years. Perhaps most importantly for the long-term future of the country, this election could see a strong showing for pro-independence parties in Scotland hasten the breakup of the UK, coming at a time of heightened unrest in Northern Ireland and the possibility of a border poll there in the future.  This means that, despite the implementation of a Brexit agreement, the constitutional drama in the United Kingdom may be far from over. 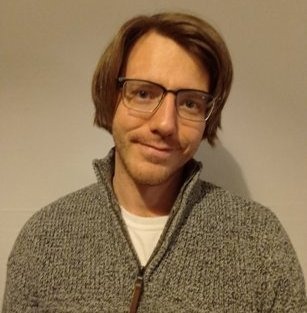