The post-WW2 US-led liberal global order is crumbling before our eyes and Otto von Bismarck’s nineteenth-century aphorism surely applies, “We live in a wondrous time, in which the strong is weak because of his scruples and the weak grows strong because of his audacity.” The United States of America in the age of Trump has become its worst enemy. The foreign policy decisions are self-defeating and the decisions to pull back the US’ influence on the world stage are a true testament that “the strong become weak due to their scruples”. The systems, structures and alliances that the US has built over the past 7 decades to cement its position as a global leader and superpower are diminishing with almost every decision and tweet from the current US president, Mr. Trump. Not only has Trump’s inept one-man isolationist diplomacy led to question the US’ role on the global stage but it is opening up an imminent rise of China. The vacuum that is being created threatens the liberal order, as states like China and Russia rise to the occasion to assert their positions as the next world leaders. 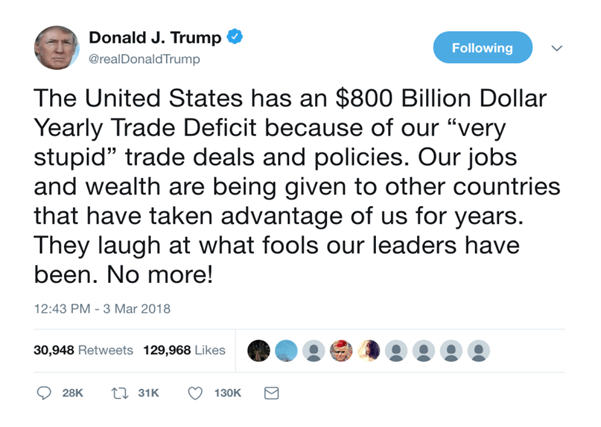 In an article, I wrote titled The denuclearization summit that had an agreement with a missing ‘VI’ protocol, argued that one of the winners of the Trump-Kim Summit was China, even though it was not there at the Singapore Summit. While China has always wanted a stabilized North Korea, it has also wanted the removal of US troops from the Asia-Pacific region. It should be noted that in 2018, China reserved $175 billion for defense spending and the modernization of its military. At the Singapore Summit, Mr. Trump conceded that he would be removing more than 28 000 American troops stationed in South Korea and also halt joint military exercises with South Korea that have been held since 1976. Such a move by the Trump administration lessens American influence in Asia as a counterbalance of China’s dominance in the region. Even though the decision was made in negotiations between North Korea and the US, allies in East Asia (South Korea and Japan) were not made privy to Mr. Trump’s decision beforehand.

The shift in US defence in East Asia was not only a surprise for the allies and Trump’s own Defence Department but illustrate that as Trump implements his “America First” policy or the most recent doctrine “We’re America, Bitch” by isolating from Pacific traditional alliances, China is quietly seeing an opportunity. An opportunity that many analysts have written about for the past 3 decades. For China, Mr. Trump is the gift that keeps on giving and at this point, China does not have to do anything but to wait as Trump cuts out traditional US alliances. At the 2018 congress, the Chinese Communist Party (CCP) through the leadership of President Xi made it clear that China was looking forward to reshaping the global order and the rules in a manner that suits China. The platform that was adopted at the Chinese Communist Party showcases a China that is ready to elevate itself in foreign policy and international issues. While some experts point out how the platform intensifies the rise of China, what is being ignored is how the United States is literally facilitating the rise of an assertive and expansionist China as the US diminishes its influence on the global stage.

Washington’s withdrawal from Asia would mean that China is now free to continue bolstering its maritime policy and claiming the disputed islands in the East and South China Seas. The irony remains that, Mr. Trump perceives his policies as being hard on China and Beijing probably wants to keep it that way. Some could argue that Trump has had a hard-line stance on China particularly on trade tariffs. But he has undermined his own position by deciding to alienate key allies such as Germany, France, Canada, Japan and Britain. Such alliances are key in deterring China’s hegemony. These alliances are not only good for the US but they collectively put pressure on China. The withdrawal that Mr. Trump has made from the Trans-Pacific-Partnership (TPP), and the Paris climate accord and his threats to NATO and NAFTA are changing the course of American global leadership as some of these treaties like the TPP were created as an alternative to China and to limit China’s dominance in trade and curtail its power. The reversal of the role is threatening America’s dominance in the world. Without key Pacific alliances, the United States’ position as a global hegemon will crumble thereby paving the way for China’s rise.

However, it should be noted that international engagement is not a zero-sum game. Mr. Trump’s boastfulness and ignorance are undermining Washington’s influence. It is not lost on foreign policy analysts that the current President of the US has no foreign policy experience but what is bewildering is Mr. Trump’s unwillingness to learn or to seek advice from career foreign policy experts. Although, I hold that international system and world order change overtime, I am amazed at how Washington’s influence in the world could be undone by its own doing as Trump tweets and attacks its alliances that have helped secure America’s influence on the world stage for more than 70 years. Alfred McCoy argued that Trump is teaching us almost daily that even though the US’ architecture of the world order is formidable, it is also surprisingly fragile.

In the age of Trump, allies are no longer certain if the US can be trusted as a partner in the fight for multilateralism and the impact could affect American position years after the departure of Trump Administration . Could a tweet from a self-aggrandizing president be the catalyst that aids China’s rise? American global alliance networks have kept it safe and strong. The shared prosperity through trade agreements and regional institutions that were created as a conduit for Washington’s global dominance no longer  motivates the US foreign policy.

If we want to understand the delicacy and importance of alliance, we have to look at how the US/NATO alliance managed to outmaneuver the now defunct Soviet Union. On the other hand, as the US withdraws from trade agreements, China’s “Belt and Road Initiative” is thriving, and globalists view it as the next long term grand strategy. On issues of trade, military and alliances Trump has become China’s most valuable assert. China will continue filling the vacuum as Trump pulls out of international agreements, weakens US alliances and damages US interests around the world. The Trump years will prove to be the perfect catalyst for the rise of China. All conditions conducive for China’s rise are there- the US under Trump is pursuing an isolationist foreign policy while the Chinese is attempting to pursue a larger role. It can be concluded that the Trump years would be the defining factor of how the global order shifts and whether China is willing to take advantage and assert itself as a dominant superpower as the power and influence of Washington diminishes.