The Geopolitics Behind the Tiananmen Square Incident

The year was 1989. Hu Yaobang, the former chairman and General Secretary of the People’s Republic of China, passed away suddenly after suffering from heart attack. Together with Zhao Ziyang, Hu was deemed a reformer and the right-hand man of Deng’s political and economic reforms, and a well-respected leader, especially among the tertiary students. It was 10 years ago in 1979 that Deng opened up the Chinese market to the world and adopted many western practices. Deng’s idea was to allow the coastal cities to get rich first.

Unfortunately, the economic boom also resulted in severe hyperinflation and corruption. Conservatives within the CCP believed Hu’s political reforms were way ahead of their time, and Hu took the hit after failing to clamp down the student demonstration in 1987. He was duly dismissed.

After Hu’s death in April 1989, students mourning the passing of a liberal leader, took to the street to demonstrate against corruption and called for more political reforms. The CCP leaders took a liberal view on the demonstration, allowing the students to march to the Tiananmen Square. Once the students occupied the square, they decided to stay put. In the beginning, the students felt strong and legitimate. However, as the time passed, they felt restless. When the students wanted to leave, the student leaders discouraged them to do so. One of the student leaders was Chai Ling. She was elected by the leaders to head the Defend Tiananmen Square Headquarters group. The others were Wu’er Kaixi, Wang Dan, Feng Congde etc. The student leaders were determined to get their wishes. They demanded that the CCP leaders were to meet them in person. Several dialogues were arranged as the CCP leaders wanted to end the hunger strike and maintain order. Sheryl WuDunn of The New York Times wrote “what was remarkable was not just that the meeting took place but that the Government televised nearly all of it, apparently as a concession to a student’s demand”

Chai Ling, probably out of guilt, decided to give a private interview to a US journalist Philip Cunningham on May 28, days before the clampdown. She said that their goal was to create bloodshed so that people that were apolitical would be pissed off with the government, and they would rise against the CCP. But, she said she could not reveal the truth to the students. She also said she did not want to die. The whole cause was not worth dying for.

During the demonstration, activists from Hong Kong, Taiwan, US etc were working fanatically to keep the “fire” going. Noteworthy regime changers from the CIA were also present. They provided all the necessary food and tents for the students.

Then finally, on the 3rd June 1989, the government decided that they would move in to remove the protesters. Loudspeakers on the square were turned on, calling the students and workers to leave the square. Then when the deadline came, the military vehicles were given the instruction to move in, all of a sudden, some unknown worker demonstrators armed with Molotov cocktails, and they threw the ignited Molotov cocktails into the cabin of the slow-moving vehicles and tanks.

The cabin caught fire and the soldiers had to run for their life, but they were stopped by the mobs. The mobs beat them up and burned them to death. That was when some of the soldiers decided to open fire at the charging mobs. This happened along the Chang’An Dajie, especially near Muxidi.

All these were happening while the students were safely staying in the square. Finally, the students agreed to leave the square, and they were seen marching out of the square and vowed to return another time.

Wait a minute….The students in the square died, didn’t they? That was told to us by the western media, as well as those from Taiwan and Hong Kong. Yes, and they claimed they were simply repeating stories told by Chai Ling, who together with her husband, Feng Congde, and Wu’erKaixi, were safely staying in Hong Kong, escaping with the help of CIA and some Hong Kong activists through Operation Yellowbird. They later went on to the US and were given university placements in top universities. Chai Ling who claimed that thousands died in the square that night earned a masters degree from Princeton, an MBA at Harvard University, and worked for Bain & Company, the Boston-based consultancy.Wu’erKaixi became a political commentator in Taiwan, and Wang Dan, who spent a couple of years in jail, managed to get himself a medical parole and join them in the US.

At the time the Chinese government’s official account of the events was immediately dismissed out of hand as false propaganda. Yuan Mu, the spokesperson who gave a report on the casualty, claimed that around 300 deaths and several thousands were wounded. He reported also that there was no casualty in the square that night. His claim, however, was ridiculed by the press.

Years later, the BBC’s Beijing correspondent at the time, James Miles came clean that there was no casualty in the square. A Spanish crew also produced a video detailing how the students were given ample time to leave. A Taiwanese singer turned activist, Hou Dejian, also personally vouched that there was no death as he was the last to leave the square around 6 am on the 4th of June. Finally, Secret cables from the United States embassy in Beijing have shown there was no bloodshed inside Tiananmen Square when China put down student pro-democracy demonstrations (Wikileaks: no bloodshed inside Tiananmen Square, cables claim). The question is; if there was no death in the square, why did the US and the rest of the world impose sanctions and embargoes on China, and claimed China killed up to 10,000 that night? Why did the Hong Kong press play along with the lies?

What we now believe is that the June 4th Incident aka Tiananmen Square Incident (Massacre according to the western media) was part of the Color revolution that plagued the communist bloc during that period of time, and one that later on brought down the Soviet Union. The CIA and the relevant NGOs, eg, The National Endowment for Democracy(NED) and the Voice of America (VOA), were involved in the plotting of the regime change. The CIA moved Gene Sharp, author of the Color Revolution manual, to Beijing where financier George Soros had incorporated the eponymous Fund for the Reform and Opening of China. CIA Director George H.W. Bush withdrew Ambassador Winston Lord from Beijing and replaced him with James Lilley, an operative experienced in regime change. Bush and Lilley had been close friends since the early 1970s when Lilley was the head of station for the CIA in Beijing and Bush was Chief of Mission and de facto Ambassador. In 1975, as Bush was returning to Washington from Beijing to head the CIA he appointed Lilley National Intelligence Officer for China, the highest-ranked expert on China in the American intelligence community. They infiltrated the universities and recruited some professors and student leaders, as well as paying some of the workers to ignite a violent unrest on that night. They knew that they controlled the media that would garner enough support from the world outside as long as they produce a well-scripted plot. For eg,

To be sure, they almost got what they wanted. As for the Hong Kong and Taiwan activists, they were ready conspirators. Hong Kong was facing an imminent return to the Communist country, and Taiwan at that time still considered itself the legitimate China. Both Chinese cities had reasons for a successful revolution.

Perhaps, overall, the CIA and NED did get what they wanted; after 29 years, 18,000 Hongkongers still commemorate the June 4th Incident with candle lights in the Victoria Park, and the call for the end of the CCP did not die down. As a matter of fact, 1989 probably gave birth to the Pro-Independence Taiwanese and Hongkongers. 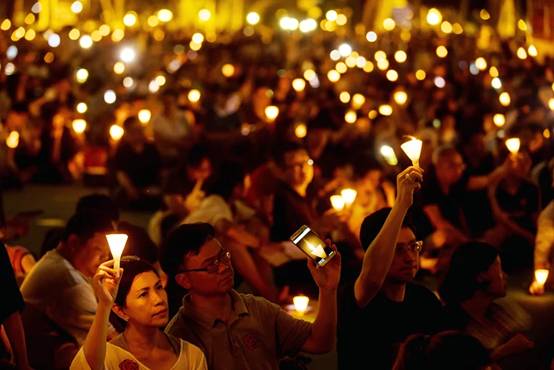