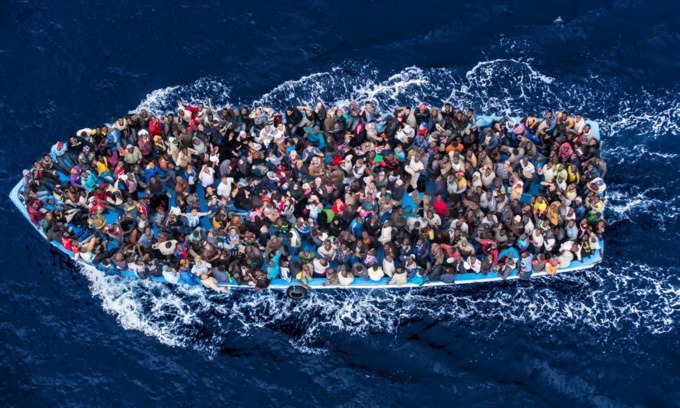 “No one leaves home unless the home is the mouth of a shark.”
Migration brings with it an inescapable sense of disorientation. Refugees and migrants crises are not a new phenomenon. Human beings have been moving from place to place by choice and under compulsion since the ancient time. But today the situation is quite aberrant.

Today, more people are fleeing their native regions due to violence, disaster, war, climate change and human rights violation. An unprecedented number of 65 million people have been forced to flee their home around the world. The images of boats filled with people, drowning children and women, masses held behind fences and children crossing walls have attracted an extensive global attention towards the refugees. News of persecution, deaths and smugglings are regularly making headlines in the mainstream media.

Resultantly, more people are voicing for the refugees today. But what makes the present situation an aberrant experience of our age is the fact that the crisis parallels more than an ever philanthropic world. Thousands of people are starving to death, being enslaved, persecuted and smuggled in an era where there are an estimated 10 million non-governmental organizations (NGOs) worldwide.

It is ironic that despite this much-hyped philanthropic passion of modern world very few countries are hosting a big population of refugees and migrants. Nearly half of refugees are being hosted by only 8 countries. There is a lack of equitable responsibility sharing. Developed countries are reluctant to welcome the migrants and refugees. Fear, ignorance and xenophobia have ruled the reason. Many deaths are caused by mismanagement of shifting the people. Asylum-seekers are dying in their search for safe havens. There are multiple drivers of the refugee crisis. It is not only non-state actors that have rendered towards this crisis but climate change, state-sponsored policies and poverty are equally responsible for the current state of chaos across the world. The immediate neighbours of crisis-hit countries are building fences and walls to push back the refugees. Hardline immigration policies are being executed.

The refugee crisis is not something insuperable to overcome. It can be smoothly addressed and overcome by an adequately managed system of handling and shifting the people. We can save hundreds of lives and rehabilitate thousands of people before they, get into this state of frustration and isolation, and turn to criminal networks.
The crises demand global sharing, equitable responsibility, cooperation and reciprocity. Xenophobia, discrimination and intolerance towards refugees need to be negotiated by the leaders of the host countries.

Mr. Ban Ki-moon had rightly observed that “it is time to build bridges, not walls”. The global community should move ahead to strengthen the system of managing large movements of the masses. Every state needs to acknowledge and honour their responsibilities and international obligations. We need to ensure the safety and dignity of displaced people. The disdainful and discriminating treatment towards asylum-seekers is motivated by baseless presumptions that welcoming migrants and refugees would cause unrest and crimes and it would negatively affect the economy of the host countries.

However, empirical precedents suggest that refugees and migrants, in fact, contribute to the growth and development of host countries. They generate their economy, redraw the demographic map of host countries which in itself is a direct advantage. Besides this, addressing the drivers of forced displacements still needs to be a top priority for the international community.

Thirdly, smugglers and traffickers should be combatted with an iron hand so that safe migration of people is ensured.
Thus, greater global cooperation, unity and equitable participation are the only ways to address this increasingly dreadful global challenge. Migration and movement of people will continue to grow in the coming days due to violence, terrorism, disaster, violation of human rights, climate change and the shortage of trade, skill and labour. The global community can only tackle this crisis by cooperation and serious attention in which it has failed until now. “I urge you to celebrate the extraordinary courage and contributions of refugees past and present.” » Kofi Annan