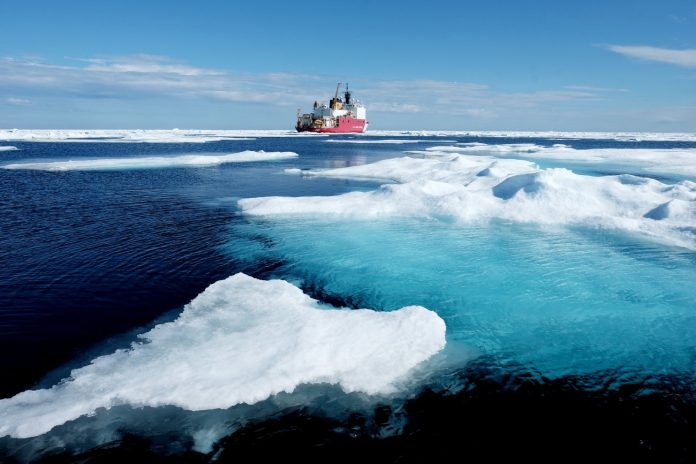 The Arctic is the area around the North Pole.  It includes northern parts of the USA (Alaska), Canada, of Russia, Norway, Sweden, Finland, Iceland, Greenland, the Svalbard Open Sea, and the Arctic Ocean. The Arctic region is defined either by the Arctic Circle or by Arctic isothermal line.

After the end of World War II, the strategic importance of the Arctic was on the rise. Russia is currently building military infrastructures and bases in the region. However, Moscow is not the only player in this geopolitical competition. The Arctic Ocean is surrounded by Europe, Asia, America and Greenland which means new players are already on the scene.

Prior to World War II, there was no considerable military activity in the Arctic region. The strategic utility of the wider region was important for the allies during the Second World War since they could transfer military equipment and control important transit points.

America and Soviet Union began to claim the Arctic by the end of the Second World War. Both nations sought to enhance their strategic positions in the region which result in the creation of several military bases. After the 1950s, both of the superpowers wanted to find ways to deploy new weapons e.g. nuclear weapons, bombers, ballistic missiles which led to the creation of airports and air bases. However, after the end of the Cold War, most Arctic states moved their forces away from the region. Recently, the Arctic has re-emerged as an important area of interest.

According to an article by Joseph V. Micallef, “To date three countries, Russia, Canada and Denmark, have extended claims to the arctic seabed that encompasses large portions of the Arctic, including the geographic North Pole. China too, although not an arctic nation, has set its sights on a broader role in Arctic affairs. While the U.S. has not yet extended any broad territorial claims to the arctic seabed, the U.S. Navy is gearing up to deal with the challenge of naval surface warfare in an ice-free Arctic.”

The rise of the Russian Federation over the last two decades helped to re-militarize the region. Russian polar mission in 2007 triggered the military competition in the region, during which the Russians placed their flag on the Arctic seabed. This action caused great concern to other Arctic states, especially those who were members of NATO. In addition, the US and Canada have also decided to allow the North American Aerospace Defense Command (NORAD) to operate in their polar regions. In 2009, the Russian Security Council stressed the possibility of a war in the Arctic over the next decade due to the upcoming climate change that will permit further research and exploitation of the Arctic’s natural resources. Since 2007, Russia has been using strategic bombers and surveillance aircrafts with long-range and anti-submarine capabilities. The US has claimed that Russian bombers have infiltrated NORAD areas several times since 2007

In addition, the Russian Federation has the largest fleet of icebreakers in the world, six of which are nuclear-powered and one of them is the largest in the world. In response to increased Russian activity, the other four “Arctic Five” countries have also increased their military presence in the region. Canada too is an aggressive player in the region. It has made significant investments in its defense sector. Ottawa has 13 conventional icebreakers and a fleet of long-range aircrafts. Canada performs three interdisciplinary military exercises annually together with Denmark and the United States, focusing on the Arctic region. Denmark and Norway have shown increased military activity. Denmark has acquired new patrol boats in the Arctic, and has also joined the Greenland and Faroe Islands military administration called “Arctic Command”. Norway has invested hundreds of millions in military equipment for acquiring multi-role helicopters as well as frigates and corvettes for surveillance purpose.

Military preparedness and confrontation confirm the possibility of an armed conflict in the region. In February 2009, a Russian bomber managed to avoid interception by the Canadian Air Force, 24 hours before US President Barack Obama’s visit to Ottawa. In response, a huge military exercise took place in 2012 in Northern Norway and Sweden involving 16,000 soldiers from 15 countries. Russia took the exercise as a provocation and the retaliation came a few months later when Moscow conducted a military exercise involving a motorized brigade and armored tanks.

The emergence of the Arctic as a region of interest is directly linked to climate change and the reduction of Arctic ice caps. Climate change is a global phenomenon and more specifically for the Arctic. Melting ice is negatively impacting the stability of the region. The region is warming at least twice as fast as anywhere else on Earth, making it easier to drill massive new fields of oil and natural gas.

Recently, the US Geological Survey (USGS) announced that 30% of unrecovered natural gas reserves and 13% of oil deposits are likely to be at the bottom of the Arctic Ocean at a depth of fewer than 500 meters. Climate change will increase the potential for exploitation of the possible deposits and help further diversify traditional energy supplies, confirming Churchill’s first post,  security (in this case referred to British Oil Security) on the exploitation of oil is based on the variety of sources of supply. The reliance on oil and gas supplies is vital for energy-intensive industrial societies. In recent years, there has been growing concern about the security of energy supply in most countries. International demand is steadily rising and the growing instability in the oil-rich Middle East and Latin America have caused a rise in oil price.

Exploitation of oil in the Arctic is not a novel phenomenon. Today, one-tenth of the global oil production and a quarter of natural gas come from the Arctic. In recent years, a number of energy-related companies have been collaborating in various programs in an attempt to reduce research costs, since underwater Arctic resources have not been adequately identified and mapped. The most important source of untapped oil and gas reserves comes from the report of the US Geological Survey (USGS). The report concludes that the Arctic contains three times more natural gas than oil and the largest quantities are within the continental shelf of the coastal states. It is easy to understand the importance of this finding for the countries concerned.

Apart from hydrocarbons, the Arctic has significant deposits of mineral ores and rare earths. Companies are conducting research in Greenland on iron, gold, lead, zinc and so on. Similar research is also taking place in the Arctic region of Canada. Nickel, uranium, and diamonds have also been identified there. In the 1990s, several diamond discoveries in the continental regions of Nunavut and the Northwest regions of Canadian territory made Canada number three in the world in terms of diamond production.

The receding Arctic ice will create new waterways for transportation and shipping. The new routes will reduce traveling distance, time and cost. Arctic states are already competing with each other to establish their control over those routes. Competition for control can be another friction point between countries involved.

The melting of Arctic ice, possible hydrocarbon and mineral deposits, new and shorter transportation routes, increased military presence, lack of mutual trust and weak international institutions might contribute to a great power rivalry in the region.