Amid heightened tensions due to the imposition of fresh sanctions by the US to punish Iran over its nuclear program has sent shivers to countries like India whose import of oil may upset the balance of payments. But the exemption of Chabahar Port from sanctions is the silver lining for India as it the one of the largest investment overseas, especially in this strategically important region. The US has kept Chabahar port out of sanctions due to the geo-economic and strategic goal of keeping the region politically and economically stable. With the US planning to pull out troops from Afghanistan and in the context of ongoing peace talks with the Taliban, its primary goal is to ensure that rebuilding and stabilizing plans are not impacted due to blockade of the Strait of Hormuz.

Even last year in November when the US imposed sanctions against Iran, the Trump administration exempted Chabahar Port and the construction of a railway line connecting it with Afghanistan from the sanctions. Iran acknowledges that it was due to India only that such relief was given by the US. Even after the fresh sanctions by the US this month, Chabahar’s geostrategic location is so important that, it will remain immune to the US Naval deployment in the Gulf of Hormuz, as per Dr. Sudha Ramachandran, “situated at the mouth of the Gulf of Oman on Iran’s Makaran coast, it gives Iran direct access to the Indian Ocean. Besides, even if Iran’s enemies were to shut down the Straits of Hormuz, Chabahar port, being 300 km to the east of the strategic straits would be able to function, reducing Iran’s vulnerability to international pressure”. But there are also strategic interests of the US in not bringing Chabahar port under its sanctions since any attempt of blocking trade via this port to Afghanistan and other Central Asian Republics (CAR) will force them to trade through Gwadar Port for which these countries may be subjected to Chinese influence.

The motive of the development of Gwadar Port by China is to avoid the choke point of  the Strait of Malacca in case of naval blockade, in addition to accessing Central Asia through the development of the Gwadar as the Silk Road Subway Antenna, China’s most prominent program is to boost its presence in the north of the Indian Ocean, a presence that will be alarming for experts in the United States. Moreover, the US also realizes that any adverse impact of sanctions will directly affect the strategic partnership of the US, India, and Afghanistan in the region, Chabahar Port will be the forefront of Afghanistan; the country that the United States claims to be committed to its development, especially economic development; the US wants India to play a more active role in Afghan reconstruction. The energy needs for Afghanistan is also dependent upon this port, the U.S. Secretary Mike Pompeo granted an exception to the port development and the construction of an associated railway for the shipment of non-sanctionable goods through the port for Afghanistan’s use, as well as Afghanistan’s continued imports of Iranian petroleum products.

The Chabahar Port is further connected to Afghanistan and CARs through the road network, trade to Central Asian countries via Zarang Dilaram route will benefit not only Afghanistan but also other countries. The development of physical infrastructure may also help India, Iran, and Afghanistan to maintain peace, counter-terrorism, and fight drugs. Chabahar is crucial to Afghanistan, before the construction of Chabahar Afghanistan was making use of Karachi port for which the port authorities used to charge heavy handling fees and import/export duties. According to the Director General of the ports and maritime sector of Sistan and Baluchestan, the cost of evacuating goods at Shahid Beheshti port of Chabahar for Afghan traders per container is $ 1,000 cheaper than Pakistan’s ports and $ 1.5 million cheaper than Bandar Abbas’s Shahid Raja port. More importantly, the Chabahar port is also the starting point of the international north-south transport corridor (INSTC), and the US wishes that the strategic stability of this region be ensured by conducting trade operations through this port. The INSTC plan envisages thousands of kilometers of all-weather highways across Central Asian deserts to transport goods to Azerbaijan. Here, logistics hubs have been set up for transporting goods to the Russian port of Astrakhan and onwards to Russia’s European markets. Other nodes would transport shipments to Turkmenistan and its neighboring countries.

Even for mutual trade between India and Iran, Chabahar Port is a highly viable project, it is only six days journey by fast ships from Kandla Port which is one of the largest government-owned port, responsible for the import of hydrocarbon resources and fertilizers. This port is also nearest from the largest Indian private Mundra Port, the same time is taken from Mundra Port to Chabahar which handles one of the largest amounts of containers and bulk mineral services. The exemption of Chabahar Port from the US sanctions is in consideration for the prospective strategic interest of the US; so that the rebuilding and stabilization plan for Afghanistan and America’s friendly relations with India are not impacted. 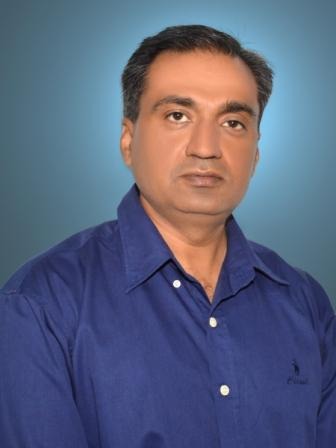 The author is a Second-in-Command in the Border Security Force (BSF). He has 19 years of experience as a practitioner in border management and security. Mr. Kumar has significant experience in serving at major Western Border States of India as a field and staff member.