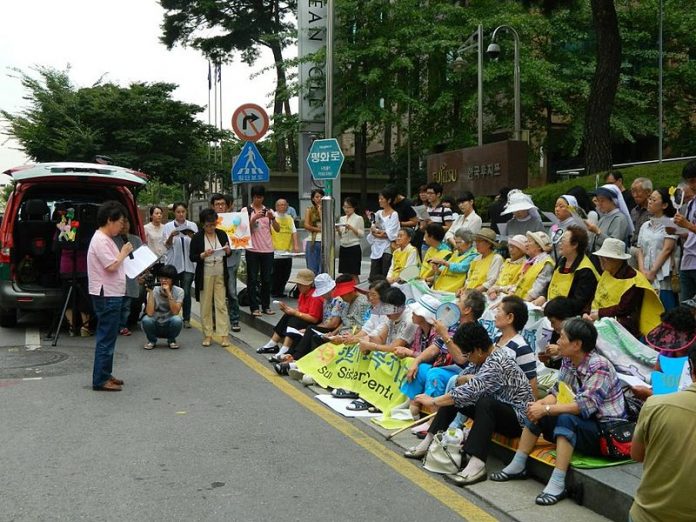 Relations between South Korea and Japan witnessed intense stress of late because of popular movements in either country since 2018. The political leadership of the nations played tough against one another to appease their respective domestic constituencies, inevitably leading to degradation of relations as a trade war took hold. However, the two heads of government have come to the diplomatic table in December 2019, in Chengdu for a trilateral summit. Both parties were inclined towards normalising relations, however, no concrete commitments were made. As the dispute seems to simmer down, an appraisal needs to be made of the multitude of factors responsible for degrading bilateral relations as well as those eventually easing them, to make an assessment of Japan South Korea ties.

In November 2018, South Korea’s top court passed a ruling ordering Japanese companies such as Mitsubishi Heavy Ltd to pay compensations to groups of South Koreans who had been forced to serve as wartime labour in the Second World War. The opposition of the verdict by the Japanese government sparked a mass movement against Japanese goods and tourism in South Korea. Another demand was made, for the Emperor of Japan to personally apologies to the surviving South Korean ‘comfort women’ taken by Imperial Japan during the war. The Japanese administration responded by revoking ‘preferred trade partner’ status for South Korea and restricting exports to South Korea’s largest sector of electronics as well as its auto sector, substantially damaging both of South Korea’s top export sectors. In return, South Korea threatened to back out of its intelligence sharing pact with Japan. Prime Minister Abe met with the South Korean Prime Minister in October 2019 and in the following month, tensions went down as South Korea opted to reverse its decision of backing out of the intelligence sharing pact. This comes at a time when the two largest economies of the World, the U.S. and China, are already engaged in a trade war. Throughout the dispute, the U.S. uncharacteristically refused to weigh in. Such neglect of their allies’ issues has become a characteristic of the U.S. administration under Trump and has left a vacuum for China to step in as a mediator. The Trilateral summit in Chengdu with the Chinese Premier and the suggested free trade agreement between the three powers of East Asia signals an increased Chinese role in East Asian politics.

Japan and South Korea’s bilateral relations have suffered in the past due to the history of Japanese occupation of South Korea between 1910 and 1945. This period is seen by South Koreans as a scar on their history, their language, cultural heritage and pride. Present day South Korea was caught in a nationalist storm when the case of compensation for war time laborers came up. Such events are not uncommon in their relations. Japan claims that it has settled all war reparations in 1965 by paying $800 million.

In matters of trade, Japanese and South Korean economies are largely interdependent, Japan is the second largest exporter to South Korea, primarily in the auto sector and electronics. Prime Minister Abe’s restrictions have harmed South Korea’s manufacturing as high grade industrial material was withheld; so much so that President Moon threatened backing out from the intelligence sharing pact with Japan if the restrictions weren’t lifted. Ultimately the President’s decision of not backing out, possibly came under U.S. pressure and the threat of North Korea. South Korea remains the fourth largest exporter to Japan, with exports of 28 billion USD, while Japan exports goods worth 53 billion USD to South Korea (2017). Thus there is a greater dependence of South Korea on Japanese imports. This dependence has been exploited by the Japanese leadership to damage the South Korean economy, taking a form of coercive diplomacy, in order to force South Korea to drop its demands and approach the diplomatic table.

From China’s viewpoint, the scenario seems to be a win-win. If Japan and South Korea normalise relations or better yet, make a trilateral trade agreement, China, being the largest economy in the region would inevitably prosper, in addition to being seen as a responsible power. If talks are unsuccessful, and the dispute continues, South Korea will be even more reliant on trade with China, drifting closer to it and perhaps further from the U.S. alliance system in East Asia. However, in the latter instance, the status quo would be disturbed, and Japan’s insecurity will be fueled. The idea of Japan becoming a militarily assertive power once again, is a fear of the South Koreans as well as the Chinese, and would ultimately lead to a precariously unstable East Asia. The decreasing interest of the U.S. in maintaining its presence overseas, increases the possibility of such a scenario. President Trump has demanded that Japan quadruple its payments for the U.S. troops stationed in the country. If the U.S. were to prompt Japan to handle its own security, Japan would pursue military modernisation and probably even nuclear weapons for its security. Thus, for China, it is important to maintain the status quo in East Asia and ensure that Japan does not pursue militarisation. Another reason for hosting the summit is the improvement of relations with South Korea. In 2017, South Korea’s deployment of the THAAD system, invited protest from China and strained relations. A more positive South Korean outlook towards China is in its national interest.

The U.S. leadership has remained largely absent from the dispute; pressure was put on South Korea by the U.S. to stay in the intelligence sharing pact with Japan, besides that however, no real steps have been taken. Harry Harris, the U.S. Ambassador to South Korea, met with top South Korean CEOs in Seoul, urging the business community to take a more proactive role in mending ties with Japan. The U.S. seems preoccupied with its trade war and with provoking Iran, paying little heed to deteriorating relations in East Asia. President Trump has been unwilling to involve the U.S. in the dispute when called by President Moon to intervene. The U.S. has had very close relations with both South Korea and Japan in the past, and has troops as well as military bases in both nations. V.D. Cha classifies South Korea and Japan as quasi allies, as they have a strong military alliance with the U.S. in common; however, neither have an alliance with one another. Thus the U.S. may rely on its deep rooted alliances in East Asia to weather turbulent relations between its allies.

Most players in East Asia seek the normalisation of Japan and South Korea’s bilateral relations in order to restore the status quo. However, the possibility of close North-South Korean ties and an increasingly unconcerned U.S. complicates the path to settlement. In Chengdu, Prime Minister Abe asserted that South Korea must take the first step in order to restore relations; signalling that Japan has an upper hand in the dispute and that South Korea needs to make a compromise. If maximalists within the South Korean leadership prevail, there will be no compromise in their demands and the trade war will be prolonged, warranting third party moderation. On the other hand, if nationalist sentiments and domestic politics do not control diplomacy; the dispute can be resolved, paving the path for a mutually beneficial bilateral relationship.