The pictures below are disturbing. None of these images convince anyone that these are minor issues that do not require a national discussion. Instead, they ignite fear among people. For some, it might ignite the religious sentiments; for some, it shows that India is moving towards communal disharmony. For others, it provides a political advantage. Ironically, we can never know if these pictures show us reality. Now, it is not these photos that circulate in the WhatsApp groups. These are videos and first-person narratives. In that situation, it would be challenging for a layperson to decide what is real and fake. The public tends to form their own opinions and perhaps turn them into imaginary truths. Some call this situation – information bubbles. Research reveals that due to the increased information and easy access, there is a disturbing increase in the confirmation bias of the public. 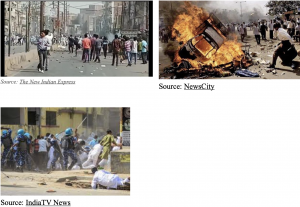 Increasing confirmation bias is one of the reasons for the emotional skew towards religion. How can this be stopped? How can we prevent the public from forming opinions? Well, they are based on biased narratives and fake information. Does this somehow inform us that the internet has to be regulated? This is one of the hot debates currently happening across the world. Until now, there was no consensus on the regulation of the internet. Even now, I am not taking an affirmative stand. This article encourages discussion over the regulation of information on the internet.

There is no need to discuss whether the state has to regulate information. It has already been decided, and states worldwide are taking the necessary steps to gain control. India’s new Intermediary rules of 2021 are one such example. They mandate all the internet companies to hand over the data (including the personal data) to the government to uphold national security. Not just in India; most developed countries do this. As internet regulation by the state has become a common practice, the discussion should be on what to regulate and how much. The paragraphs below will show how internet content is regulated in the European Union, China, and the United States and how India compares.

Within the borders of Europe, information is free to flow across the state boundaries. It is restricted only if any content is explicitly barred by the European Union (EU) parliament or EU mandates. Internet service providers are mandated to treat all the information equally. There should be no bias even in bandwidth allocation unless explicitly restricted by European Union legislation or state legislation that complies with the European Union mandate. Even if any fake information is being floated, or any content that incites communal harmony is detected, the new Digital Services Act (2022) draft of the EU mandates that digital hosting services provide a detailed explanation of removing content to the content generator. This process is carried out even if the removal request comes from the government. When the content is blocked without proper legal reasons, a complaint can be filed, which can be addressed via lawful or extra-judicial means. Suppose the judgment favors the platform user/service recipient. In that case, the service provider should reimburse all the fees born by the plaintiff. These provisions show that their internet regulation is anchored to human rights rather than social harmony. The state is not the highest authority, but it is public.

Private entities have developed the platform, so they also enjoy the profits. The Data Security Act turns the onus of delegating the risk management, content regulation, and compliant filing regarding the potential criminal content to the platforms. This system provides private entities with a free hand to operate in cyberspace and empowers the public in case of discrepancies. The state will not have any unfair advantage over the flow of information.

China is also the same in protecting its citizens’ rights. However, the party is the highest authority, not the legislation. The party has complete control over the flow of information over the internet. China goes a step further in controlling the internet. If police use the clause “protecting the national security,” they can apprehend any citizen with the digital proof of behavior anomaly.

Even the official reports reiterate that one of the motivations for China to invest more in AI surveillance technology is greater control over its population. New Development Plan (AIDP) explicitly encourages the use of AI for surveillance. Its language shows that such usage of AI is entirely normal in China. The paragraph taken from a translated version of the AIDP document reveals that China is all set to have complete control of the society, which has been attempted many times in the history of China.

“Research and develop a variety of detection sensor technologies, video image information analysis and identification technology, biometric identification technology, intelligent security, and police products, around the comprehensive management of the community, criminal investigation, anti-terrorism, and other urgent needs. Establish an intelligent monitoring platform. Strengthen the intelligence of security equipment in key public areas. Support the conditions of the community or the city based on AI to carry out public security regional demonstrations.”

The United States does not have strict legislation on the internet. There is no regulatory legislation regarding the internet. However, the government appears to have reasonable control over the data collected and processed by US companies. This includes Google, Amazon, and Facebook. The leaked NSA files by whistleblower Edward Snowden reveal the US internet surveillance history. All the information management is carried out under the pretext of national security. The rationale is that any piece of information, combined with other data analyzed meaningfully, becomes a valuable piece in a giant puzzle. This shows that there can be continuous internet data monitoring, and whenever the US feels threatened, it does not back out from using this data. No internet regulation exists, but according to the state’s interest, internet content can be moderated.

How does India fare in this situation?

India’s cyber regulation is based on the Indian IT Act 2000 and Intermediary rules published in 2021. There is no consolidated data legislation. The data was introduced in 2019, and it is still pending. The draft bill focuses on consent-based operation for digital service providers. It is thought that providing a window for the end-user to accept or decline makes digital services an individual choice. However, it is ironic that the bill does not realize that digital services have become necessary rather than a luxury. When an individual does not consent, they are deprived of essential services. This is sheer blackmail rather than consent-based service provision.

Further, articles 18 and 19 of the Data protection bill provide the public with a façade of digital rights. They allow users to update their personal information and migrate their data to other platforms. People would gain nothing from these rights rather than cosmetic happiness.

Article 20 empowers the public to appeal to companies to remove their data. However, this process is not easy. The provision of article 32 is similar to that of Intermediary rules published in February 2021. This is regarding the grievance redressal systems. Though the intermediary rules mandate all the digital platforms to set up grievance offices by three months from the date of issue of the gazette, there is no evidence of grievance redressal offices. Indian legislation is the weakest among the three cases presented in this article regarding personal data protection. The exact status is carried when it comes to information regulation. However, the state has gotten stronger with new intermediary rules. The form can process the data without consent from the data principal. The reasons mentioned by the bill are i) for the benefit of the individual, ii) for medical emergencies, and iii) for legal proceedings. There is no mention of what is meant by the ‘benefit of the individual.’ This alone will give a free hand to the government to use collected data for any purpose.

It is observed that across the world, states have an advantage when it comes to the regulation of data. During the crisis, almost all the states, including the US and EU nations, have vested power among themselves to remove internet content. However, there is a significant difference between the EU and India. In Europe, any action a company takes must be justified to the public, per the EU legislation. India has no explanation if the state deems any content to be inflammatory. It has a similar attitude to China. This article has provided enough to debate how internet information must be regulated. Should India take the stance of China or the EU? India can borrow EU regulations if it still wants to be a free democratic country. If democratic centralism appears to be the requirement, then the current path is good. Ultimately, it is up to the public to decide.

*Arun Teja Polcumpally is currently a doctoral fellow at Jindal School of International Studies. He is a Research Assistant at Center for Security Studies (CSS) and Editor at Jindal Center for Global South. His area of research is the impact of digital technologies on the global power structure. He worked as research assistant at Foundation for Democratic Reforms, Hyderabad in 2018 before becoming campaigning manager at Social Post Political Consultancy. The views and opinions expressed in this article are those of the author.