After a series of accidents involving US 7th Fleet based in Japan, the latest FONOP in the South China Sea conducted by USS Hopper is a feeble effort to keep its presence felt, and a response to increasing uneasiness felt by allies in the West Pacific.

2017 was a year of mishaps plaguing the 7th Fleet. In January 2017, the USS Antietam, a US Navy Ticonderoga-class guided-missile cruiser, damaged its propellers and spilled hydraulic oil into the water after running aground off the coast of Japan. In May, a South Korean fishing boat struck the USS Lake Champlain, while the Navy warship was conducting operations in international waters near the Korean Peninsula. No injuries were reported. Shortly later in June, a guided-missile destroyer USS Fitzgerald suffered severe damage to its starboard side after colliding with a merchant ship. 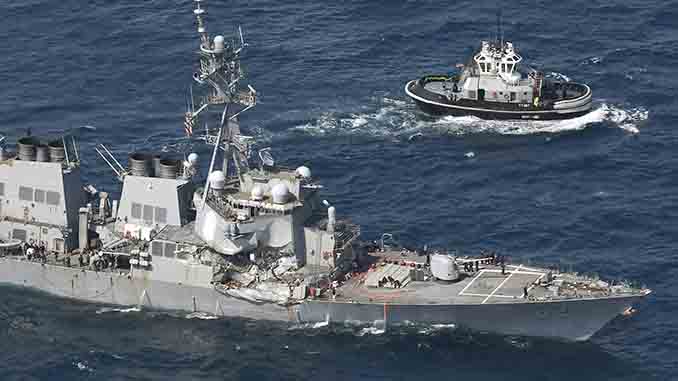 Then in August, the USS John S. McCain collided with the merchant vessel Alnic MC while the destroyer was making its way to a port in Singapore. Finally, in November, the guided-missile destroyer USS Benfold (DDG 65) was participating in a scheduled towing exercise in Sagami Wan, when the tug boat lost propulsion and drifted into the ship. Military experts speculated that the ever-expanding military exercises to scare North Korea into quitting the nuclear tests, and the failed attempts to contain China, have overworked the US sailors. Instead of relooking at the grand plan, what Pentagon came up with is an even grander containment that includes getting the 3rd Fleet to come to the rescue. Defense Secretary Jim Mattis officially pronounced China and Russia the reformist powers that “seek to create a world consistent with their authoritarian models” in Trump’s first National Defense Strategy on 19th January 2018.

The Pivot to Asia is failing, but the US and her allies aren’t going to certify the death. Japan, the most fervent ally that wants to see a contained China, has begun promoting a prism defense alliance that included the US, Japan, Australia and India. The “Indo-Pacific Alliance” will replace Pivot to Asia, and soon after Trump endorsed the alliance during his trip to Asia, Japan and Australia have jumped into action. India is interested to be part of the alliance after the Doklam encounter, and the perceived Chinese “encroachment” into its traditional sphere of influence. However, it is too early to tell if an alliance of these 4 countries would prove to be effective. Australia’s prime minister, Malcolm Turnbull, is facing a lot of political pressure as China is Australia’s largest buyer of natural resources. Chinese investment in Australia also account for 735 billion dollars in fiscal 2016-2017. Even Japan, the initiator of the alliance, is hedging its position by declaring its interests in the Belt and Road Initiative. Trump, as we know, is more interested in American First. With 3 of the allies having Plan Bs, a shrewd Modi will find it hard commit to the alliance.

Meanwhile, with North Korea’s Kim Jung un busy with the Winter Olympics, and the scheduled joint military exercise with South Korea on hold, the FONOPS will be US last efforts to keep its presence in SCS.