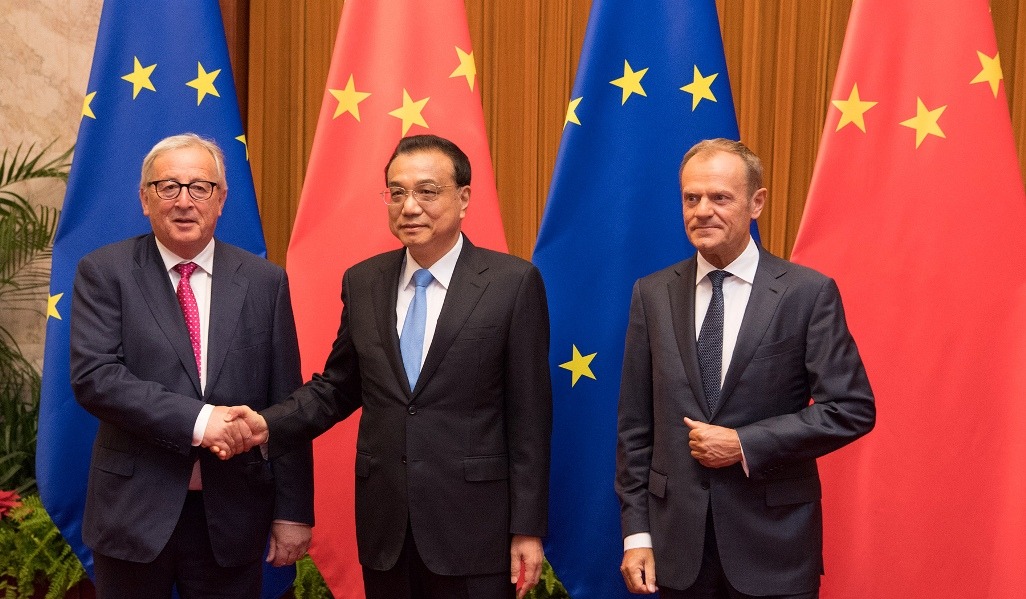 While Donald Trump and his Russian counterpart Vladimir Putin were busy gathering for a high-profile summit in Helsinki on Monday, a far less publicized meeting between two other world powers was simultaneously held in Beijing. The twentieth EU-China summit was maybe less attention grabbing but is still significant in its own right. Although the EU-China relationship is becoming more fraught, both sides shared an interest in a summit marked by more positive tone this time around.

The backdrop is of course President Trump’s protectionist trade policies, which are hitting both the European Union and China (though not in identical ways.)

Despite the fact that Sino-European relations have become more complicated in recent years—as European officials are growing more wary of unfair Chinese economic practices—Beijing now senses an opportunity to pivot toward a more positive relationship with Europe by making opposition to Trump’s protectionist policies a common cause.

In the lead-up to the summit, Chinese leaders boldly pushed for a joint statement condemning Trump’s trade policies and suggested joint EU-China action against the United States in the WTO. Although European leaders were always going to balk at such overtures, Beijing is already scoring brownie points by positioning itself as a defender of free trade and multilateralism. For China, the outreach to Europe serves a twin purpose: hedging against the disruptive impact of the Trump administration’s trade policies and splintering the West.

European officials, in the meantime, are seizing the opportunity to encourage China to move in the direction of more openness. This is also about sending a message to Washington on the importance of maintaining multilateral trade at a time when the U.S. president is undermining it—and referring to the EU as a “foe.”

In Beijing, the two sides signed a joint communiqué  that “reaffirmed their commitment to multilateralism and the rules-based international order.” Given that European and Chinese leaders failed to agree on a joint statement at their past two previous summits, this marks a noteworthy improvement in their relationship.

Among the most tangible outcomes was an agreement on establishing a working group to modernize the WTO and the reaffirmation of their support for both the Paris climate accord and the Iran nuclear deal. Leaders also discussed how to promote market access, cooperate on connectivity, and advance a bilateral investment treaty—whether these items can be achieved in the medium-term is another matter. The controversial issue of China’s market economy status was apparently not addressed.

However, one should be wary of reading too much into the positive tones at the summit. The EU-China relationship remains challenging. The EU is clear-eyed about the lack of reciprocal market access for Western companies in China in certain sectors; the role of state-owned companies and excessive subsidies; and weak IP protection, including foreign-ownership requirements to encourage technology transfers.

There have also been cyberattacks against companies to obtain corporate secrets, although Chinese enterprises themselves have also been victimized. On top of this, the abolition of the two-term limit for Xi Jinping, the potential for stronger authoritarian rule at home, and continued Chinese assertiveness in the South China Sea is reinforcing European skepticism about Beijing’s future orientation. Brussels also views China’s attempts to court a group of countries in Central and Eastern Europe through the 16+1 framework as divisive. Yet the EU has yet to put in place a long-term strategy toward China.

Beijing has been taken aback by growing China-skeptic sentiments in some parts of Europe. For example, an investment-screening scheme is currently making its way through the EU institutions and could be passed this year, rendering Chinese investments into strategic sectors (including technology) more cumbersome.

Moreover, as China pushes its Belt and Road Initiative, the EU will be launching its own connectivity platform, offering additional options to countries within the union and at the periphery.

Yet not all European capitals are on the same page. Leading the charge for more scrutiny on Chinese investments is Paris and Berlin along with the European Commission. Several governments in Southern, Central, and Northern Europe embrace greater Chinese economic presence.

These divisions, along with the disagreement between Washington and Europe over trade tariffs, ultimately undermine the possibility of having a joint transatlantic approach toward China. At a time when China is increasingly asserting itself on the international stage, such an agenda is needed now more than ever to defend and uphold multilateralism and rules-based order.

Furthermore—just to complicate matters on the European level—a number of politicians, such as retired French prime minister Jean-Pierre Raffarin, are now advocating a closer post-Atlanticist alliance with China, including calling for a “G4” between France, Germany, Russia, and China. But even short of this, the notion that China represents a potential partner for Europe against a protectionist U.S. administration is gaining traction.

However, siding with Beijing against Washington is a nonstarter. While continuing to push China to liberalize its economy, Europe should also redouble its attempts to engage the Trump administration on China. The U.S. steel and aluminum tariffs risk setting a bad precedent for others and undermine the multilateral trading system. But Americans and Europeans still share values that differ vastly from China’s—both when it comes to business and human rights. Angela Merkel has been pushing China on human rights, helping to secure dissident painter Liu Xia’s Berlin recent exile.

Strong emphasis should therefore be given to getting Trump to understand that the key to pushing back against China’s unfair practices is maintaining a strong relationship with allies in the EU and Japan (who just signed a comprehensive trade agreement together), being a reliable partner, and upholding multilateral institutions like the WTO. The irony is that Trump’s own National Security Strategy calls for stronger transatlantic cooperation on addressing shared concerns about China’s economic practices, while Trump himself has rebuffed European suggestions to join hands.

European Commission President Jean-Claude Juncker’s upcoming meeting at the White House provides an opportunity to move beyond the current tariff standoff. At a time when the broader transatlantic agenda is in flux, keeping in the big picture in mind and making the challenges posed by China’s rise a unifying force that brings Europe and America together makes sense. But don’t place bets that a divided EU can successfully navigate a delicate balancing act between a disruptive Trump and an assertive China.

The piece was originally published by Carnegie Endowment for International Peace.

The author is a director of
Europe Program and
a fellow at Carnegie Endowment for International Peace.

The author is a Nonresident Senior Fellow
of Europe Program and
Asia Program at Carnegie Endowment for International Peace.

Russia’s Weapons of the Future: How AI Could Escalate Global Conflicts