Home Regions Europe To Make Sense of the Commonalities and Differences Between Today’s Turkey and...
Facebook
Twitter
Linkedin 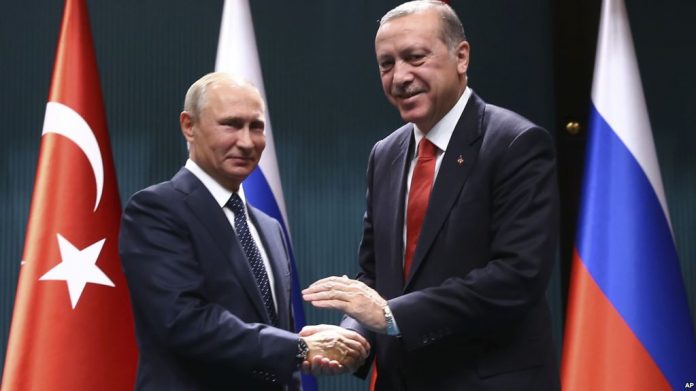 Turkey and Russia are countries that geographically and culturally straddle both Europe and Asia. Ankara and Moscow have witnessed the violent fall of monarchical governments in the early twentieth century, and the radical social, political and economic changes associated with it. Both countries experienced waves of economic and political reformations (liberalization) in the 80s and early 90s. Both countries have witnessed a “conservative resurgence”, usually resulting from economic and political difficulties shared by both countries during the ‘Turbulent 1990s,” In both Russia and Turkey, conditions allowed strong and charismatic leaders and political parties such as Recep Tayyip Erdogan and the ‘Justice and Development Party’ (AKP) and Vladimir Putin and ‘United Russia’ into power.

Erdogan and Justice and Development Party’s (AKP) rise to power came as a response towards the 1997 Military Memorandum against the government of Necmitten Erbakan and his Welfare Party. The bloodless coup was still fresh on the minds of the Turkish public and it has upset the conservative Islamic segments of Turkish society, who felt violated by the Turkish military’s actions. The JDP English acronym for AKP in the early 2000s was also able to gain popularity among a wide array of voters, not only from political-minded Muslims, but also nationalist rural voters and cosmopolitan urban voters. A very important element of the AKP’s victory in 2002 was the widespread dissatisfaction shared by a large number of the Turkish electorate over political instability and economic difficulties that plagued Turkey in the 90s. The AKP, with a youthful and macho Erdogan representing it was seen as a fresh new face, not marred by the bitter politics of the 1990s. From the November 2002 elections to the present, the AKP would become the dominant party in Turkish politics. Only to have its dominance challenged after a major defeat in the June 2015 general elections. However, the Justice and Development Party was able to recover following an authorized but controversial Snap Election in November 2015, winning back a comfortable majority in the government and avoiding any need to form a coalition with other parties. The grassroots campaigns inside and outside of the Turkey considered an asymmetrical, likely turned into smear campaign on dissidents and oppositions, JDP.

Russia’s situation was similar to Turkey. While many parts of the world were enjoying a “Roaring 90s’”, Turkey and Russia experienced a “Turbulent 90s.’” Russia’s Post-Soviet liberal political order had failed to satisfy the Russian public and keep Russia stable. The turbulence of the 90s’ was more acute in Russia. Homelessness and unemployment were high. The Russians experienced a drastic drop in standards of living following the collapse of the USSR. Russia became embroiled in a series of bloody conflicts in the Northern Caucasus. The Russians were naturally attracted to the notion of a powerful ruler. However, manly or muscular “powerful” Russian ruler did not start with Putin, but rather the “liberal” Boris Yeltsin, who attempted to create a powerful Russian presidency following the ratification of the Constitution of the Russian Federation in 1993.

The “strong” leadership styles of Recep Tayyip Erdogan and Vladimir Putin are often compared by many observers and political pundits. Both leaders have become increasingly authoritarian in their approaches to governance. Both figures have embraced nationalist machismo as their styles. Conservation of the way of life and anti-western rhetoric are commonly employed by both Erdogan and Putin. Erdogan’s Islamic nationalism is popular among many conservative Muslims outside of Turkey, While Putin’s macho appearance, Russian patriotism and embrace of Orthodox Christian conservatism is alluring to some conservative and right-wing people in Western Europe and North America, despite the pugnacious relationship between Russia and the West. Erdogan is considered a “modern-day Sultan.”  Putin is interchangeably considered a Soviet or Tsarist nostalgist, depending on whether Putin’s past association with the KGB, the military buildup in Russia under his leadership, or his embrace of the Russian Orthodox Church and promotion of social conservatism are emphasized.

While both countries appear to be heading towards authoritarian paths, there are still some differences between the routes Russia and Turkey are taking. While Russia is more overtly authoritarian, Turkey under the leadership of the Justice and Development Party has utilized functions typical of polarization and fractions to retain power. However, unlike Putin’s more clear approach to maintain power, Erdogan’s use of rhetoric does not guarantee stability beyond the short term.

Despite thematic similarities and the recent period of diplomatic cordiality, Turkey and Russia are increasingly at odds over their own national interests, the Frozen Conflict in the Caucasus and the Syrian Conflict. Moscow and Ankara are starkly opposed to each other in these arenas. Some of the aforementioned similarities, particularly the current governments and political orders in both countries are contributing factors to the cooling of relations between Moscow and Ankara. Although the economic relations may be considered a way of “good buddies” or demonstrate a coalitions against the west, geopolitical realities point their relations towards other directions.

The leadership styles of both Putin and Erdogan make hard-line stances towards each other more likely. This emphasis towards centralized power has enabled the current trend of the tough-man image. Like similarities in both authoritative, patronage system and nepotism, there is clearly a discrepancy between Russia and Turkey in terms of military and economic power. Russia surpasses Turkey militarily and economically, sometimes using hard-power as leverage against Turkey on occasions. Russia has long ambition to utilize all effects to shift Turkey’s political alignment for its aspiration toward Balkan and Europe. Russia sees Turkey as a gate, as a transit not an ally. In case of Turkey, existence of ruling parties, the maintenance and designing of legislatures, the role of the military, elections, control of the media, repression, coercion, electoral fraud, political socialization, social fragmentations and patronage are explicitly viable in Turkey’s politics today, along with these, paralyzing the rule of law, violations of human rights and undemocratic mechanism in state are in favor of Russia.

Another similarity is, both countries have had ambitions to “become European.” If it was not formally joining the European Union, it was being seen as a close associate to Europe. This urge to be included in Europe comes from Turkey and Russia straddling Europe and Asia, both geographically and culturally in proximate of European and Asia. In common dichotomy, the West (Europe) is associated with modernity, individualism, and liberalization, whether political, social or economic. The East (Asia) is associated with tradition, collectivism and paternalism. Following the era of Enlightenment in Europe, the Industrial Revolution and the primacy of Western imperial power, it became more attractive for many nations outside of Europe to associate with the “west” as opposed to keeping with old traditions. In Russia, it came earlier on after the reforms of Tsar Peter I in the late 17th and early 18th centuries. In Turkey, attempts to reform the Ottoman Empire’s politics occurred almost parallel to Russia’s reforms, starting in the early 18th century with the “Tulip Era.” Both Turkey and Russia have experience moving between both sides of the commonly understood dichotomy between East and West. Now, with the acceptance of strong executive power, enshrined by Russia’s 1993 Constitution and Turkey’s 2010 Constitutional referendum, there is a noticeable reverse to the trend.