Artificial Intelligence (AI) technologies have advanced rapidly over the years and some countries have already begun the process of infusing them with existing systems and technologies. China today stands as a “full-spectrum peer competitor” of the United States in the commercial and defense applications of AI  and is succeeding at the task. There are several ongoing debates about who is leading the AI race and what factors determine so. In the case of China and the United States, investigating their AI policies through the lens of economic development clarifies to a great extent the advantages that one country holds over the other and elucidates on the different layers that make up the competition domain in AI. This analysis will eventually also reveal how AI competition is deepening the divide between the Global North and Global South.

A top destination for the best AI Talent

From an economic perspective, growth and innovation sprout from a larger AI talent pool. However, market indicators are revealing a large talent deficit in AI in the United States, with experts seeing no change in this shortage trend. AI talent is at the center of driving innovation in the AI sphere; more talents imply more labor trained toward ensuring that AI systems are secure, efficient, and safe. Talent remains a key competitive advantage for the United States in AI, in large part since the country has an ideal platform to attract and retain the top technical and creative minds across the globe. A great many of these minds come as international students who stay and, ultimately, become some of the best engineers, developers, and scientists. Attracting foreign talent helps the United States fill critical talent gaps in its AI sector. However, a negative trend is currently challenging these advantages.

The U.S. immigration system has become harder to navigate even for the most highly skilled; this was even more prominent during the Trump administration, which employed more restrictive immigration policies. This compounds the United States’ attempt to remain competitive since other countries have begun developing their domestic AI ecosystems and the driving policies, turning themselves into more attractive professional destinations. China, Israel, and the United Kingdom are increasingly attracting AI talent to perform cutting-edge research and development. In the same vein, global competition has stimulated domestic upgrading in China, while competition between provinces and domestic private businesses has added to competitive pressures within the country.

Another important factor that gives countries a competitive edge in AI development is knowledge and research. The United States’ capacity to conduct top-notch research gives it a considerable advantage in AI development and implementation. Research demonstrates that the top ten AI researchers are located either in the United States or in Canada and are directly affiliated with U.S. institutions. As a result, U.S. institutions have long led the way in the age of AI discovery and are now taking the lead in AI research and implementation. China, however, does not fall far from the United States in research. According to a study by PriceWaterhouseCoopers, $7 trillion of the $15.7 trillion in global wealth AI will occur in China alone. China’s massive economy and heavy investments in education are bringing the country closer to breakthroughs in AI research, whereas China has historically been known to imitate and repurpose existing technologies researched and created by other competitors.

An AI Divide between the Global North and Global South

So far, it has become clear that the Global North is the powerhouse of research and development in AI. To further prove this point, researchers from Princeton, Cornell, University of Montreal, and the National Institute of Statistical Sciences published a report pointing out that countries possessing the maximum economic power are the ones capable of reaping the actual benefits of AI. Despite finding widespread applications, AI remains, for the large part, in the stages of research and development. There have been many concerns raised about the fourth industrial revolution accentuating the divide between the Global North and the Global South and deepening the extractive relationship that the wealthy core has with the low-income periphery.

Low-skilled workers from the Global South are often tasked with cleaning data for low pay. For instance, Amazon Mechanical Turk acts as a crowdsourcing platform to get data labeling tasks done but distributes the workers’ income through Amazon gift cards. While these crowdsourcing platforms themselves are not a problem, the major issue with this methodology lies in the way the AI research and product development companies employ these means to get important work done for extremely cheap pay. Neither can it be denied that companies are already spending millions of dollars to acquire a humongous amount of data for labeling. Data annotation projects would be economically unviable without the cheap labor made available by the Global South; even if countries like the United States and China were able to invest in their own labor to perform such tasks, it would require extended timelines and more training resources, both of which would act as a financial weight-down. Technologies, models, and tools created for developing countries can only lead to the further reinforcement and heightening of the power imbalance if they continue to store data in the West. Ultimately, developing AI technologies for but not by developing countries will only amplify the existing oppression, biases, and extractive mindset.

On the flip side, just because the Global South has historically been the provider of cheap labor does not mean it must continue to do so. The economic and digital divide can be reversed by employing AI systems to democratize education, facilitate training and skills development, and provide better access to health care and jobs. A human-centric approach is necessary when addressing questions of the role that AI can play in the Global South, primarily due to the combination of work insecurity and how cultural and social barriers inhibit people from securing employment. Many countries are increasingly viewing AI as a new factor of production rather than simply a productivity enhancer. China, for instance, is expected to experience a significant increase in projected growth as a result of injecting AI functions into multi-domain systems.

There are several channels of AI-led growth that countries can exploit. Although a field that demands more research, automating complex physical tasks that necessitate agility and adaptability is a major advantage that countries are attempting to acquire. AI-powered intelligent automation can also solve problems across industries and job titles where regular automation technology functions on a task-by-task basis. In terms of existing labor and capital, countries can boost their economic growth by using AI to effectively implement labor and capital augmentation instead of replacing them. Furthermore, AI boosts labor by complementing human capabilities and bringing new tools at the disposal of employees to improve their natural intelligence and capabilities. Lastly, AI can enhance capital efficiency — an indispensable factor in industries where it represents a large cost already incurred. AI is largely discussed through the lens and scope of economic theories since one of its most underestimated benefits is that it can drive innovation as it webs out through the economy.

That AI is the future has become part of today’s mainstream media and global culture. There is much awareness about the potential that AI holds for the planet. The above discussion has managed to convey some economic perspectives on what factors are proving consequential in helping countries lead the AI race, taking the United States and China as two ideal focal points. At the same time, the discussion has also revealed some consequences of AI such as the widening digital divide between the Global North and Global South. While it would seem that the fourth industrial revolution is following the same trend as previous ones in terms of extracting raw materials from the Global South, there is enormous potential for reversing these trends and empowering the Global South to become a leader in AI by creating more educative policies aimed toward its pool of AI talent. In this new industrial age, the race to AI supremacy has only begun. 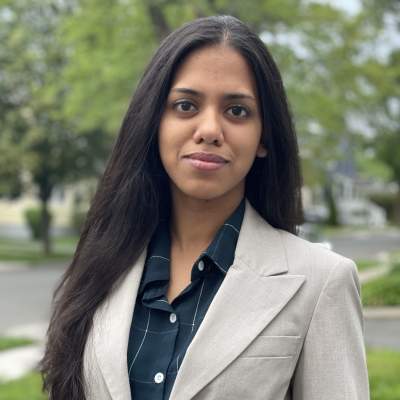 Harshana Ghoorhoo is pursuing a Bachelor of Science in Diplomacy and International Relations from the School of Diplomacy and IR at Seton Hall University. She previously interned at the Modern War Institute at West Point and was a research fellow at the Youth Center for Research. Her current research examines how military operators’ levels of trust in AI systems impacts tactical readiness on the battlefield.