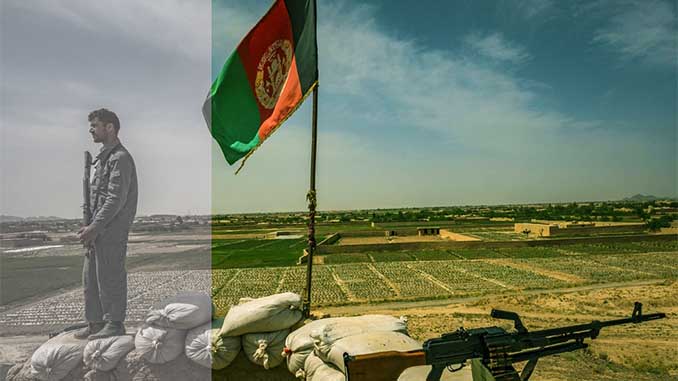 The unimagined discrepancy between the anticipations and the status quo of the state of Afghanistan has turned the task of eliminating terrorism in Afghanistan into an ambiguously deadlier game. The indistinct terms of the – yet undeclared – aftermath have made the bad job of policy-making an intimidating task in the Pentagon. It has fostered a sense of invincibility among the Taliban and disappointment among the anti-Taliban forces mainly the National Army of Afghanistan. The global perception of this unending war in Afghanistan has turned critically ambivalent. Taliban are becoming more and more aggressive; increasingly winning capture over the state-controlled territories. The US, under the – not so new – Trump administration, has avowed to embark on another journey of fighting the ‘seemingly invincible Taliban’ in Afghanistan.

In this backdrop, the state of Pakistan stands deeply mired into the current quagmire. Islamabad – read Rawalpindi – is accused of discriminate recognition of the terrorists. Between the Do-more and the No-more theories, the mounting mistrust between Washington and Islamabad has further propelled the situation towards deterioration. Retrospective miscalculations have turned into a nightmare. Protagonists are reluctant – say not ready – to continue in this bloody episode of the global war against terror.

The interests of both the cohorts in Rawalpindi and the Pentagon may not unequivocally converge in every detail but the conclusions of both the equations are the same. Pakistan still endeavors to prove the veracity of her anti-Taliban and anti-Al Qaida demeanor. The Pentagon, on the other hand, continues to hold her traditional litany of demanding Pakistan to Do-More. The situation is grim; anticipations at this juncture are more than scary.

The premonition, stretching from the current searing situation, on the part of Pakistan seems legitimate. Far from the optimistic calculations, the current tide, obviously and unsurprisingly, foreshadows a situation which ingrains unbridled challenges for Pakistan. Following are some of the imminent challenges that the state of Pakistan would be facing in case Afghanistan turns out to be a rogue state under the Taliban control again.

The rebirth of the Taliban controlled Afghanistan on the map of South Asia would be unconventional in a sense that this time there would not be a Taliban rule established after a parochial civil war but a regime emerging from the ruins of a greater war.

Acquisition of political stability in Afghanistan has been an insuperable task. Be it through negotiations or force, Talibanization of Afghanistan, as the situation indicates, is becoming a possibility again. However, the re-emergence of Taliban state on the map of the world would not be acceptable to the world. Accommodation of a ‘militant state’ into mainstream global political order would remain far from a possibility. The US, from her side, would not allow such a state that possesses a threat to her security and interests to gain political recognition. Therefore, Afghanistan in the event of the breakdown of the current political structure would remain a rogue state and any other state in affiliation – overt or covert – with a rogue state would have to significantly – if not equally – feel the heat of global efforts to check and constrain the expansion of terrorism. Therefore, proven or scapegoated, Pakistan, because of her geographic compulsion and as conventional ‘alleged’ to be supportive of a rogue state, would remain a target of the world especially the West.

The volatility of the Durand Line and the ethno-lingual affinity lying alongside the border of Afghanistan and Pakistan would continue to hold both the states engaged with each other extra-diplomatically. As a result, the global perception of Pakistan would not be favorable. Pakistan would also be perceived as an insecure state – for some reasons valid as well – and, in more blatant terms, supportive of a militant state. It would not only undermine the global perception of Pakistan but also relegate and dwarf her genuine efforts against militants and terrorists.

As a matter of fact, Afghanistan under the Taliban would not remain curbed to the geographical boundary of Afghanistan. The Taliban would most certainly maneuver to expand its territorial control under the guise of Pan-Islamism. The presence of a rogue neighbor would most obviously pose challenges to Pakistan’s sovereignty. The blurred line that divides both the states from each other would remain exposed and open because of which not only Talibanization but also other elements – under some other pretext – would continue to disturb the geopolitical definition of the state of Pakistan.

The current stability in Pakistan is the result of heavy both – economic and human – cost. Tehreek-e-Taliban Pakistan, the anti-Pakistan version of the Taliban, is no more as active and strong as it was before. In the event of the creation of a Taliban state, the re-emergence of TTP is highly imminent. The Afghan Taliban and TTP share the same DNA and have deep ideological homogeneity. The Afghan Taliban would be more than willing to see their version of state in Pakistan and TTP would be the best option for them towards the attainment of that end.

The July 2007 siege of the Red Mosque in the capital of Pakistan in which Pakistan Army conducted an assault against the extremists belonging to a particular religious sect proved a defining and divisive incident in the country. The bloody aftermath of the incident across the country disclosed the ideological homology among TTP, Al-Qaeda and the radical factions of the country’s mainstream religious sect. The state of Taliban would most certainly be helpful to such factions inside Pakistan. It would not only propel religious radicalism in the country but also undermine the democratic evolution of the country because of her sect-cum-ethnicity based political order.

The rebirth of the Taliban controlled Afghanistan on the map of South Asia would be unconventional in a sense that this time there would not be a Taliban rule established after a parochial civil war but a regime emerging from the ruins of a greater war. The new Taliban regime would embed in itself a stronger sense of invincibility and act more aggressively; which might see itself more universal; successful and legitimate. Pakistan, as a matter of fact, would be the foremost and easiest target to face the fallout.

A rogue state has been more dangerous than an established state with global recognition. Because open diplomatic defiance is better than obscure nature of the interaction. The Taliban might not provide India or other external forces an ‘open’ means to destabilize or play proxy in Pakistan but it would not as well ‘ensure’ against the infiltration of proxy elements into Pakistan. In fact, the degree of proxy interference has been relatively greater in a rogue state because of its opaque nature of interaction; lack of accountability and transparency. In a rogue Taliban controlled state internal stability would remain distant from possibility. Anti-Taliban factions would always welcome foreign interference. Resultantly, Pakistan, contrary to popular calculations, would remain vulnerable to foreign intervention and proxies.

Even though the creation of a Taliban state is not something foreseeable in the near future but the verdict of the past 16 years has proven that the Taliban can’t be ignored from the political scenario of Afghanistan. While the Taliban are not, as well, ready to embrace ‘the modern system of democratic governance’, the very terms which, ambivalently, make the essential part of the ‘anticipated’ agreement between the Taliban and ‘the non-Taliban’. Corollary: even if the US left this ‘graveyard’ politically settled, the stability in Afghanistan would remain highly vulnerable. And in that case – the history might maneuver to repeat itself, and what is jolting is that no one is ready to face the foreshadowed turn of the events: that’s creepier, brutish.