Is Taiwan’s Tsai Ing-Wen out of her Mind?

The Tsai Administration of the Republic of China has temporarily blocked additional Taiwan-bound flights days before the Chinese New Year. The administration estimated that about 50,000 Taiwanese working and studying in China would be affected.

The issue began when China decided to re-open the north-bound route M503, and W 121,122 and 123 sub-routes to the existing southbound route agreed in 2015. The original M503 was approved by the International Civil Aviation Organization(ICAO). When China announced the opening of the route, Taiwan’s government at that time was led by Kuomintang (KMT) which recognized and upheld the 1992 Consensus. The Ma Administration of KMT made a plea to the mainland government, and both governments decided to start with the south-bound route while the northbound route would be postponed till a later date. 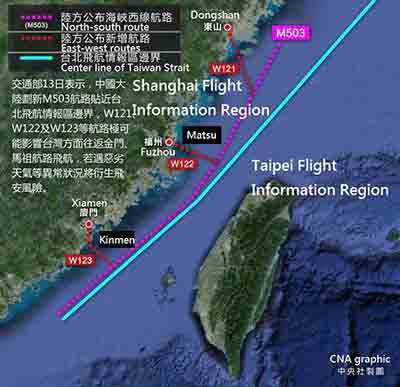 The current administration views the re-opening of the northbound route and the sub-routes to be a unilateral change in the status quo. China has not been responding to Taiwan’s Tsai Administration ever since Tsai and the DPP government refused to uphold the 1992 Consensus. Taiwan made a complaint to ICAO about the unilateral decision, but ICAO did not comment on the matter as the routes were approved by the organization after taking into consideration the flight safety and China’s increasingly busy flight routes. Taiwan also complained to friendly nations, ie, the United States and Japan, but received no assistance whatsoever. It is very unlikely that Tsai Ing-Wen will be able to influence the policy of Beijing. Now, Taiwan is on its own to resolve the issue.

Knowing that Taiwan has no means of sanctioning China, the Tsai Administration came up with the idea of trolling the Chinese flight control personnel, insisting that Taiwanese flight control personnel should make a call to their mainland counterparts to complain about every flight that takes the M503 route and the sub-routes. After the idea of trolling the mainland flight control department caused an uproar in Taiwan, Tsai dropped the idea and finally decided to block up to 176 additional flights for the busy Chinese New Year holidays to protest against China. Taiwanese working and studying in mainland China are dumbfounded by Taiwan’s decision, and are disappointed by the cancellations. On the other hand, China criticized Taiwan’s reckless decision, and decided to help the stranded Taiwanese find a way to return to Taiwan for the reunion dinner, a traditional Chinese New Year custom.

With Tsai’s approval ratings at a low of 26%, it looks like Tsai is committing political suicide with so many mistakes made in her 600 days as the Taiwan President. One has to ask if she out of her mind? I believe Tsai is trying to blow up this innocent commercial decision into a political issue or even an international diplomatic issue to force China to negotiate or at least meet with the DPP government of Taiwan without the 1992 Consensus. If Tsai is able to get a meeting with China, then it would certainly help her approval ratings and the 2018 election. But, her calculations seems to be backfiring, and she has no way to resolve the issue. It’s a gamble that is quickly becoming a nightmare.

The Belligerence of Myanmar: How Should We Hold It Accountable?

The mounting bellicosity of Myanmar has heightened tensions in the South and Southeast Asian Region. In particular, its recent provocative military acts on the...
Read more

The Land of The Rising Militarism

Japan's ruling Liberal Democratic Party, in its budget request for fiscal year 2023, expects to double its defence spending over five years from the...
Read more