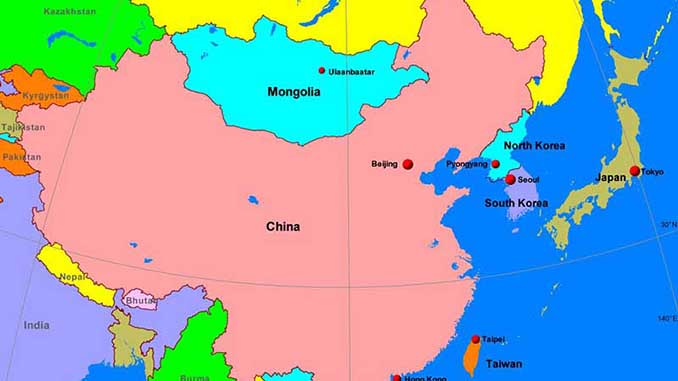 The possibility of an unwanted or accidental confrontation between the United States and North Korea heightens the fear of a nuclear Armageddon. Mercurial nature of both Donald Trump and Kim Jong-un has greatly complicated the already tensed situation in East Asia. A confrontation or a Second Korean War between the two nations can jeopardize the peace and prosperity of the entire region. North Korea has been spending most of its GDP on defense since its emergence as an independent nation. Although it is a small country in terms of economy, population and geography, it has maintained a large military of 1200000 men and women with arms, 4200 tanks, 4300 artillery pieces, nearly 950 military aircrafts and an armada of 70 submarines and 10 to 20 nuclear weapons. Lack of technological sophistication is the major weakness of its military. Economically North Korea is the most underdeveloped country in the Asia Pacific region. All the neighbors of the country have highly growing economies and much higher standard of living.

With the exception of North Korea, East Asia has earned a reputation for being the economic engine of the world. The region is populated with great powers like China, Japan and Australia. The US has forward deployed troops and military assets in Japan and South Korea. Every year, nearly five trillion dollars’ worth of commerce passes through the South China Sea and East Asian waters. Undoubtedly, it is one of the most dynamic and rapidly growing regions in the world.

In terms of security and geopolitics, it is a highly competitive and contested neighborhood. Historic enmity between China and Japan has largely shaped the geopolitical landscape of Asia-Pacific for centuries. Since the Second World War, a defeated Japan, an economically weak China, combined with the military presence of the overwhelmingly powerful the United States in the region have ushered in an era of uneasy peace.

For a while, China’s newfound economic and military power and Japan’s assertiveness under Prime Minister Shinzo Abe are unsettling the fabrics of East Asian geopolitical space and time. Recently, North Korea’s provocative and frequent nuclear weapons and ballistic missiles test remarkably damaged peace and stability of the region. Adding flame to the fuel, the United States has sent its carrier strike group near Korean peninsula –causing tension, uncertainty and instability in the region.

A preemptive strike against North Korea is unlikely, considering its dire consequences. The United States has the unchallenged military capabilities to punish the North Korean Hermit regime but an attack on Pyongyang would put South Korea in a dangerous situation of annihilation. In case of a second Korean war, the whole Korean peninsula will be engulfed in a bloody battle of death and destruction.

North Korea has a large number of artillery pieces, hiding in tunnels and caves near the DMZ, which is only thirty-five miles from Seoul. Pyongyang can send thousands of artillery shells armed with conventional explosives as well as chemical and biological agents.

According to South Korean 2016 white paper, North Korea has nearly 2500 to 5000 tons of biological and chemical weapons, which includes sarin, smallpox, anthrax and plague. North Korea is also capable of delivering missiles armed with sarin nerve agent to anywhere in South Korea. In case of a war with the North, South Korean citizens are highly vulnerable to WMD attack.

Another horrific development of a second Korean War would be the disruptions of international trade. With Submarine warfare and thousands of missiles crossing the Pacific Ocean would halt the sea line of communications, causing the suspension of trade, commerce and all kinds of economic activities.

If a war begins with a US preemptive strike on North Korean missiles and nuclear infrastructures; and Beijing decides to help its long terms ally, the consequences would be a devastating war between China and the United States. There is a high probability that China will intervene in the war, like it did in the first Korean War because the geopolitical setting of Korean peninsula today remains the same as it was in the 1950s.

During the first Korean War, the total death toll including civilians was more than two million. The United States and China lost around 34000 and 132000 military personnel respectively. A second Korean War will be far more devastating than the first one if escalation ladder gets out of control. Another two million or more people would be dead by this time. So, the international community must find a diplomatic solution to the problem. The UN General Assembly and Security Council should play leading roles in averting the impending security crisis.