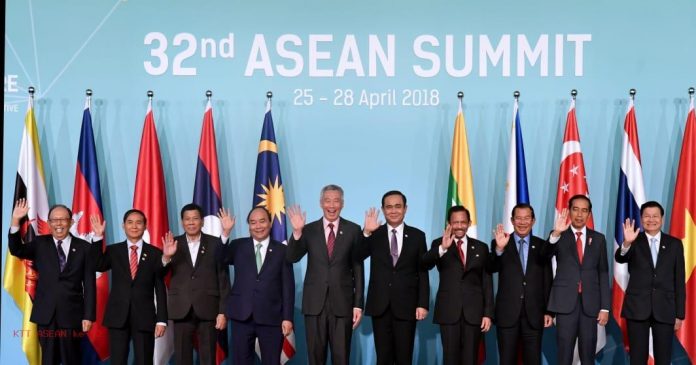 The world witnessed a historic moment of peace and reconciliation between two Koreas on April 27, 2018. The Korean Peninsula turned upside down after it had been on fire with the rhetorical fight between President Donald Trump and Chairman Kim Jong Un such as calling Trump “a hideous criminal” that deserves capital punishment by “Korean people”. Given this risky circumstance for warfare, President Moon Jae-in should be highly praised for his enthusiasm since his inauguration in May 2017 on de-escalation. The Inter-Korean Summit, at least, builds a conducive environment for talks and further cooperation.

A day after the Inter-Korean Summit, ASEAN leaders welcomed the active participation of all related parties and the commitment of North Korea. They also mentioned their support for “the complete, verifiable, and irreversible denuclearization in a peaceful manner” and their hope “for a peaceful and amicable resolution to the issue.” This statement can be analyzed in the way that ASEAN’s approach to the Korean Peninsula issue will be based on the situation and the role of key players. More importantly, ASEAN will be a spectator like other states. This assumption sounds reasonable as ASEAN has perceived itself not as a stakeholder but this claim should not be an obstacle for ASEAN to have a place on this global issue.

This article, therefore, provides some clues on why and how ASEAN could play such a role on North Korea issue as the late ASEAN Secretary-General, Surin Pitsuwan, had put a big effort on it. There are two main reasons why ASEAN should come up with its own ways. First of all, there are some analyses addressing North Korea as a ramification for ASEAN. Both Thitinan Pongsudhirak and Ong Keng Yong reflected that the assassination of Kim Jong Nam would cause a negative view of ASEAN member countries on North Korea. It could lead to a stricter measure on limiting North Korea’s activities in the region. While Bridges and Jun shared a diplomatic concern for ASEAN in order to balance between the great powers in the region.

The ASEAN foreign ministers were once asked by the former United States’ Secretary of State, Rex Tillerson, to “fully implement the U.N. sanctions on Pyongyang, which is working to develop a nuclear-tipped missile capable of reaching the United States, and to show a united front on the issue” at the ministerial meeting on Thursday 4 May, 2017. Tillerson also emphasized that “ASEAN remained a very important strategic partner”. As a result, ASEAN in his speech should cooperate with the United States by decelerating the ties with North Korea both formal and informal. At the same time, Chinese President Xi Jinping made a call to Philippine President Rodrigo Duterte encouraging the negotiations toward “a denuclearized peninsula”.

Another justification for more active role of ASEAN derives from its relations with North Korea. First of all, the range of the missile that North Korea has developed covers all the capitals of ASEAN member states. Thus, the proliferation of North Korea is a direct security threat to all ASEAN countries. Secondly, the ASEAN Political-Security Community (APSC) Blueprint 2025 emphasizes ASEAN commitment to promoting its centrality in the regional architecture. The ASEAN Regional Forum (ARF) is an ASEAN-led platform that North Korea has been invited to be a participant since 2000. Third, almost all ASEAN member states have non-hostile relationship with North Korea. There are North Korean embassies together with the presence of South Korean embassies in eight ASEAN countries (Cambodia, Indonesia, Laos, Malaysia, Myanmar, Singapore, Thailand, and Vietnam).

Likewise, there are five ASEAN countries establishing their own missions in Pyongyang (Cambodia, Indonesia, Laos, Malaysia, and Vietnam). Some ASEAN countries have been major trading partners with North Korea as well as “a significant site of illicit economic and financial activity” so far. Fourthly, ASEAN has some institutional arrangements such as the principle of non-intervention and consultation-based decision-making like the Southeast Asian Nuclear-Weapon-Free-Zone (SEANWFZ) Treaty and the Treaty of Amity and Cooperation (TAC) that could socialize North Korea on nuclear development for peaceful use. Finally, it is interesting to learn that North Korea is considering the experiences of some ASEAN countries like Singapore and Vietnam as the model or at least the lesson for its own economic development.

It is explicit from these features that ASEAN could be a potential actor. This is not only for the sake of global peace but also for its own interest of the community and the member states. The author would suggest that ASEAN should execute “charm defensive” approach in dealing with North Korea issue. This idea can be defined as a limited but constructive role, particularly engagement and socialization based on its own capacity and willingness of the member states. It does not require the member states to pay any cost or take any risk on the nuclear issue. Simultaneously, ASEAN could enhance its centrality by acting as a single voice on North Korea issue. It is different from the South China Sea issue that most of the member states have different perspectives as well as conflict of strategic interests with other major players in the region.

To maximize the benefit of implementing charm defensive approach, ASEAN should consider the following policy recommendations. First of all, ASEAN should work closely with South Korea as she is a direct stakeholder in the peninsula. ASEAN and South Korea will celebrate its 30th anniversary in 2019. This will be a good opportunity for both to frame the desirable goals of being a “strategic partner” in the realm of global peace and prosperity. In addition, both ASEAN and South Korea have shared some political ramifications as middle powers. For example, they have been part of the geopolitical struggle between the United States and China. Moon’s South Korea has been acting as a bridge-builder to match through summit diplomacy as witnessed in the Inter-Korean Summit.

In addition, both ASEAN and South Korea have encountered the dilemma between the implementation of sanctions and engagement. Moon’s action has shown us that it is feasible to create a “mixed strategy” that blends between two policy measures. At the 72nd session of the United Nations General Assembly, he acknowledged the efforts by the international community to impose sanctions with a reminder of managing it in a stable manner. Five months later, North Korea sent the delegates to attend the PyeongChang Winter Olympic Games followed by joining the Inter-Korean Summit in April. ASEAN member states can refer to this mixed strategy to defend themselves from outside criticisms on the implementation of sanctions. The policy that satisfies all members would help strengthen the ASEAN centrality as well.

Second, the Asia Exchange Association sponsored by the ASEAN-ROK Cooperation Fund arranged the simulation so-called “the 8th ASEAN-Korea Frontier Forum” earlier this year. The participants unanimously agreed to deal with North Korea issue in four areas. First and foremost, ASEAN and South Korea will promote the engagement and socialization strategies such as engaging North Korea in international events like 2018 Asian Games at Indonesia, organizing knowledge and personnel exchange programs on economic and nuclear development for peaceful use, creating ASEAN Plus Two (South Korea and North Korea) mechanisms, establishing Track 1.5 consultation of academicians and policymakers in case of any emergency. Next, ASEAN will support the NGOs working for better conditions of North Korean people by dispatching the staffs to monitor the distribution of food and medicines. Thirdly, the members would take any necessary measures with North Korea should there be any abuse of privileges to fund nuclear and missile programs. Finally, ASEAN will establish the annual consultation between North Korea and International Atomic Energy Association (IAEA).

Drawing from the aforementioned explanations, it is much possible and valuable for ASEAN to seize this diplomatic momentum. Singapore, as ASEAN Chairmanship 2018, has gained its huge reputation from being a peace promoter and paving the way for other members. Charm defensive approach will at least help ASEAN find its own way to attain the global peace together with the maintenance of the ASEAN centrality, the concept that harmonizes us for several decades.