Panama’s Problem: The Melting of the Arctic Ice Caps

The arctic is currently losing sea ice at an estimated 10,000 tonnes per second. Whilst this frightening stat poses many challenges to the world, it poses a unique challenge to Panama. The melting of the ice caps could strip Panama of its unique selling point in the sea trade industry and potentially dismantle their economy.

Panama is currently the fastest growing Latin American economy, seeing an average of 5.6% growth over the last five years, which has led to a fivefold increase in GDP since the turn of the millennium. It’s no coincidence that this growth has come as globalisation has boomed. In 2003, the canal generated $920,807,000; by 2019, that figure had ballooned to just over $3 billion.

The revenue generated by the Panama Canal and its rival in Egypt, the Suez Canal, is evidence of the vital role they play in the global economy. Pre-1914, when the central American canal was built, cargo ships were required to take the long and arduous journey around Cape Horn. Since its unveiling, 815,000 cargo ships have sailed through and saved up to 6,500km per journey in the process. Slicing travel times for gas-guzzling tankers and box boats is hugely cost effective and made the canals appealing despite the hefty toll charge. However, the cost saving which made the canals so attractive may in time be what makes them obsolete. USA Today suggest that the Arctic’s sea ice will gone by 2050. It needn’t be said what a catalyst this would be for further global warming; however, it’s the Panamanians who have the most reason to be quaking in their cutarras. That’s because the melting ice caps reveal the previously unnavigable Northwest Passage.

Now, the emergence of a Canadian competitor offering around 1,000km of saved travel, which consequently results in approximately $80,000 in spared fuel costs, is a daunting prospect for the Canal de Panama. However, it’s not the first time the Pan-American canal has had to fight to retain its dominance of the region. Plans for ‘dry canals’ have been proposed across central and southern America, predominantly by the Chinese state. Over the past decade, China has been extending their ‘railroad diplomacy’ to Latin America in the form of ocean-to-ocean railways or ‘dry canals’. They’ve been announced in Honduras, Colombia and from ports in Brazil to ones in Peru. None of these have come to fruition, it seems largely due to push back from environmental groups and a general scepticism towards Chinese infrastructure investments.

This however, isn’t the case for Nicaragua. There, Chinese billionaire Wang Jing wants to build a $50 billion canal – a number three times the value of their GDP – across the country to rival the one in neighbouring Panama. Unfortunately, despite the government’s efforts to frame it as an opportunity to lift thousands from poverty, public support has plummeted as corruption allegations have plagued the project. Allegations so strong that they eventually drew a press release from the US Treasury Office of Foreign Assets Control (OFAC) stating that the project was ‘a means to launder money’ and issued sanctions against many government cronies. The government in Managua is now entering its seventh year of silence on the canal.

Despite the potential ramifications of business with China that deter other Latin American countries, it’s easy to see why Nicaragua may have felt differently to the rest of the continent; they have history with the canal. Nicaragua was the original choice of the French as the destination of the canal before it was abandoned, and the US took over and moved it to Panama. It’s presumed that it wasn’t the source of much jealousy until the boom in global trade and Nicaraguans began to look over their shoulders as their neighbour’s economy rocketed on the back of the success of the Panama Canal. (See chart below)

So far, none of the Chinese projects have been able to dismantle the Panama and Suez oligopoly; however, the 2016 investment to deepen the canal de Panama to facilitate the size of modern cargo ships is evidence of how fragile their dominance is.

Due to its depth and global commerce strategies, the Suez handles more traffic and is yet to fend off any competition like Panama has done. The likelihood of the Egyptian canal still operating at full capacity in a decade’s time seems almost a certainty. But for Panama, they may only be facilitating trade to and from sub-equatorial America.

If the tables were turned and Canada were faced with this crisis, they could survive the decline in traffic. However, the economy in Panama is a delicate champagne flute when compared to the robust economy of Canada.

The World Economic Forum (WEF) has judged Panama’s economic stability worse than all of its central American neighbours, barring Nicaragua. This is largely due to having a staggering 40% of their GDP tied to the canal, according to estimates by The Business Year. It’s worth noting that Focus Economics have the figure at 10%. Regardless of which number it is, the canal dependence is evident. These are daunting figures for an economy on the verge of becoming another Latin American hero story. Once one begins to pull back the curtain, Panama’s economic fragility becomes clear. Despite the Panamanian workforce spending more years at school than in other Latin American and Caribbean (LAC) countries and having the highest portion of tertiary educated workers, Panama scores averagely compared to its neighbours on the World Bank’s education index. Despite spending more time in the classrooms – Panama ranks 5th for ‘years schooled’ – their graduates remain comparatively unqualified – they rank only 15th for ‘skillset of graduates,’ which suggests the quality of education is inadequate. These statistics are confirmed by the private sector who cite an ‘inadequately educated workforce’ as the third most problematic factor for doing business in Panama.

The central American nation has the capacity to join Chile and Mexico at the OECD table, yet education is the category that separates Panama from the OECD countries the most. Although one could argue that it’s actually crime and corruption.

Despite the government’s failings with social policy, Panama’s liberal economic policies have made it an attractive location for business. Labour regulations are not seen as an issue in Panama. In 2010, only 4.9% of firms considered labour regulations a major constraint, a third of the LAC average – 15.9%. Panama’s figure becomes all the more impressive when compared to the OECD’s 11.3%. Red tape restrictions also position Panama closer to the OECD nations with only 5.2% firms citing issues, the latter’s is 4.9%. 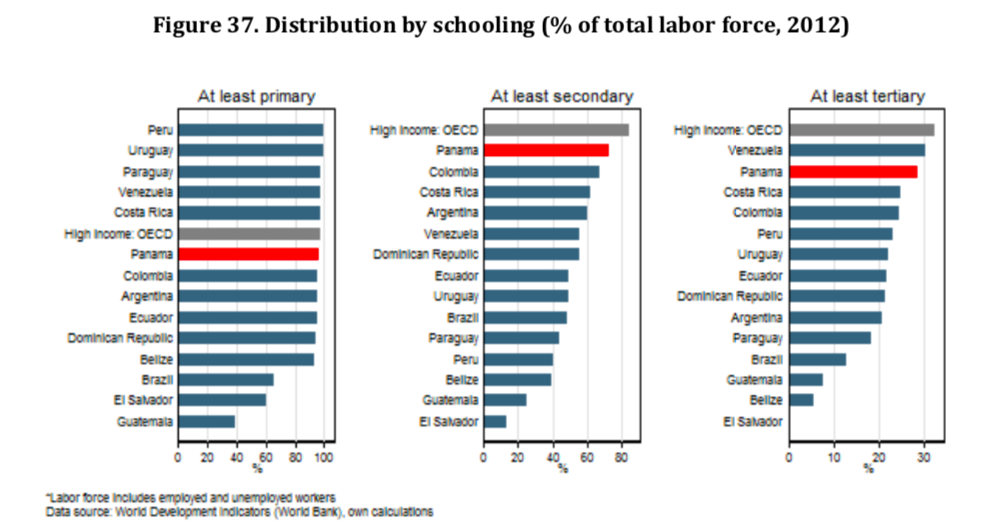 These figures suggest Panama’s economy is moving in the right direction, but they’ve struggled to diversify their economy and correct that alarming economic stability figure. It’s taken the best part of half a century for the Cobra de Panama mine to begin production. But now, Canadian mining firm, First Quantum Minerals, have invested a mammoth $10 billion acquiring and building the mine. As a result, they’ve created an estimated 7,000 jobs during construction. Once the mine is operational, they intend to carve out a $375 million annual payment for  the Panamanian government for the privilege of mining there. With any luck the mine will share some of the economic burden currently shouldered by the canal.

Another industry Panama could become a market leader in is coffee production. Neighbouring Honduras, Guatemala, and Nicaragua rank 6th, 10th, and 11th for exports in metric tonnes; yet Panama rank 37th, producing just under 2% of what Honduras yield. This isn’t because coffee magically doesn’t grow in Panama’s corner of the gulf and does in abundance elsewhere, or because no one knows how to grow coffee. In fact, it’s the opposite. Growing coffee has been occurring since the dawn of the 20th century. In 2017 one kilo of Panamanian Geisha beans set the world record by fetching $5,000 at auction. The record was doubled a mere two years later with a price of $10,000.

It seems rather strange then that, despite an abundance of skill and quality, Panama isn’t anywhere near its neighbours in levels of production, barely producing enough to warrant the label of ‘coffee-state’.

The Panamanian government have struggled to implement effective social policies and have been leaning far too heavily on the success of the canal. Before it’s too late though, the US may be coming to their rescue. The world’s largest economy is launching the Growth in the Americas program. The US Department of State website states that the ‘Growth in the Americas centres on building an enabling environment for private sector investment…’. The initiative seeks to funnel investments of around one trillion US dollars into LAC countries. Infrastructure such as Panama City’s Metro, the intercity railroad, and the Corozal port could all benefit hugely. Some of which had been earmarked for Chinese investment.

The move comes as the US seeks to overcome investor scepticism around corruption in Latin America with Petrobras and Odebrecht in particular still fresh in the minds of American investors. But the program will surely be seen as a move to quell Chinese advances in their own back garden.

Nonetheless, the arctic is melting fast, revealing more of the Northwest passage every day. What will happen first? Will Panama diversify their economy and break an overdependence on the canal, or will sea trade routes divert to the Northwest passage to save sea miles, just like they did a century ago when the Canal de Panama opened.

[Photo by  US DOT, via Wikimedia Commons]

China Shaken by Protests Over Its Zero Covid Policy

It was a tiny incident, not captured by TV cameras, nor did it make headlines across the world. But it suggested a seismic shift...
Read more