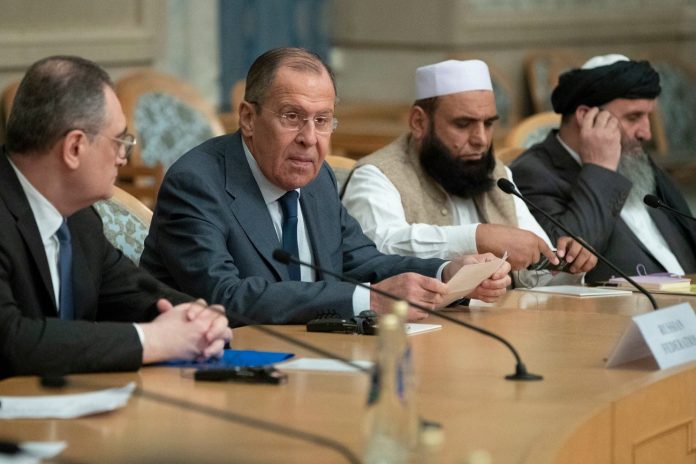 Held in the first week of November in Russia and described as the ‘Moscow Format’, the Russian initiative was purportedly aimed at settling the Afghan conflict. The meeting represented Russia’s attempt to bring the regional powers and the Taliban together while finding out ways for bringing peace to the war-torn country. Eleven countries participated in the meeting alongside the Taliban representatives and Afghan delegates. The Kabul government did not directly take part in the meeting.

It was indeed a rare sight to see the Taliban insurgents sharing the platform with the members of the High Peace Council of Afghanistan, which oversees peace efforts, and individual Afghan leaders. American observers were also present if not the American government officials. The conference is seen as significant because it has broken some ice although it has not broken the deadlock.

For the Afghan Taliban, the invitation to the meeting was its diplomatic victory. For decades, the insurgent forces have been engaged in a fierce battle against the US and its allies. With no side gaining victory through war, each of them has expressed a desire to hold talks for settling the conflict. On different occasions, negotiations have been held though to no avail.

Meanwhile, the long fight has toughened the Taliban on the battlefield, making them a force to reckon with. General Austin Scott Miller, who was appointed as commander in chief of the US and NATO forces in Afghanistan in October 2018, has stated that the Taliban (who control more than 60% of the Afghan territory) are invincible. The invitation to the international forum- the ‘Moscow Format’- has given the insurgent group an international recognition and strengthened its position. Moreover, the meeting has echoed Mr. Scott Miller that the Taliban cannot be defeated in the battlefield.  General Joseph Dunford, chairman of the Joint Chiefs of Staff of the U.S. said, “They (the Taliban) are not losing right now, I think that is fair to say.”

The Russian initiative indicates a shift in Moscow’s policy from being reactive to a more proactive player in Afghanistan and the region. Russia wants a greater understanding of the Afghanistan issue, fearing the spillover of the conflict and the spread of the ISIS in the country. The initiative to build a regional alliance, seen as a counter to the IS threat, is indicative of a new alignment of forces in a changing geopolitical climate.

In the recent past, Moscow has become proactively involved in Afghanistan. The country has been in consultation with the regional countries including Pakistan, China, India, and Iran. The ‘Moscow Format’ is a fresh move towards discovering the ways in order to resolve the Afghan conflict. The move also showed, Russia displaying its diplomatic power. Forget about the previous parleys, which failed to make much progress, the Moscow meeting appears to have a greater effect in view of the participation of the Taliban and some Afghan leaders.

The peace initiative has given Russia an opportunity to show its potential as an effective mediator between the Taliban and President Ashraf Ghani’s government. The talks will enable Moscow to play a constructive part in Afghanistan.

America has many a time said that Russia supports the Taliban– something that has increased anti-Russian sentiments in Afghanistan. On July 6, Afghan peace activists protested outside the Russian embassy in Kabul, asking Moscow to stop interfering in the Afghan crisis. To improve its image and to erase the impression that she is a Taliban ally, Russia with Tajikistan on July 17, held an anti-Taliban military exercise aimed at strengthening the Tajikistan’s capacity to resist a potential Taliban attack in the Afghan-Tajik border.

Moscow is desperate to showcase that it wants political stability and peace in Afghanistan through peace talks. The underlying aim again is to do away with the concerns about its alleged support to the Taliban and to dispel the fears of hostility towards her in Afghanistan. Besides, Moscow would like to be a party to the ultimate peace process in the war-torn country to score brownie points at the international level.

Moreover, Russia aims at removing the assumption that she is simply playing a second fiddle role to China in the Shanghai Cooperation Organization (SCO). By hosting major peace initiatives on Afghanistan, Russian policymakers will be in a position to show that Moscow is an able negotiator within the SCO and capable member in the security organization. Recently, Moscow actively participated in the meeting of the intelligence chiefs from Russia, China, Pakistan, and Iran. The gathering discussed strategies for combating ISIS.

Most importantly, Russia is seeking to demonstrate herself as a link between the Taliban and the U.S. which is looking for an end to its longest war in history (in Afghanistan). Washington has time and again tried to give peace a chance in Afghanistan by involving Qatar, Saudi Arabia, and Pakistan to strike a peace deal and to end the 17-year long war which has cost her about 1.07 trillion dollars and caused several thousand causalities. Believing that America will be compelled to establish the lines of communication with the Taliban, Moscow does not want to miss the opportunity to not only show its diplomatic power but to come closer to Washington.

What is interesting is that the Russian peace initiative came when Washington has agreed to hold talks directly with the Taliban. This shift in America’s position, that negotiations should only be led by Kabul- is significant and goes to show that the global leader is looking for an end to Afghan crisis.

It is expected that the Moscow meeting will usher in paving a way for peace efforts in Afghanistan, provided the regional players and the Taliban follow up with more such conferences to discover ways to end the war. This is despite the fact that the Taliban has categorically said, its participation in the meeting was not about holding talks with any side.

An atmosphere of peace in Afghanistan is a precondition for its stability and development. For that to happen, a power-sharing equation involving all the sections of Afghanistan is a must. Since neither the Taliban nor the U.S. is on the winning side, each of them must contribute to the peace process through talks. So, Moscow like meetings must be held to resolve the crisis amicably.