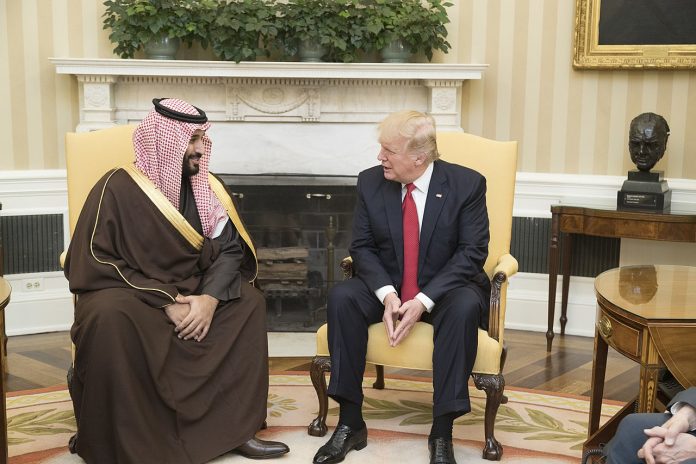 Israel and Saudi Arabia are poles apart in terms of their social set-up, culture, and polity. Yet, the two West Asian countries share good relations for nearly two decades, though covertly, for safeguarding their strategic interests in the region.

That Saudi Arabia (the hub of Islamic orthodoxy) and the Jewish state see Iran as their common adversary, brings them together to counter Tehran and its influence over the regional politics and geopolitical affairs. Consequently, there is a growing relationship between Riyadh and Tel Aviv, both of which seek joint actions against Iran to prevent it from becoming a regional leader and to stop it from threatening their strategic goals in West Asia.

Iran backed Houthi forces in Yemen and the pro- Assad forces in Syria are two prominent instances of Riyadh – Tehran rivalry for the regional leadership.

Needless to say that the U.S. regards Iran as a source of all trouble in the region and has adopted the policy of ‘maximum pressure’ on Tehran to make it change its behavior. The US has imposed sanctions on Iran and blames it for supporting the non-state actors in the region. Pulling unilaterally out of the nuclear deal called the Joint Comprehensive Action Plan (JCPOA) -reached between Iran and six world powers in 2015– and threatening to impose sanctions on the countries which may trade with Tehran, are some notable instances of pressure tactics adopted by the current US administration to punish Iran. On Jan. 3, America warned Tehran against pursuing three space rocket launches, claiming it would violate a UN Security Council resolution.

Although, the pressure tactics have induced no noticeable and desirable change in Iran’s policy, both Israel and Saudi Arabia are trying to take advantage of Tehran- Washington animosity. Their aim is to see Iran deterred and demoralized. But Tehran is unmoved as always. Recently, it rejected the warning from the US, saying its space vehicle launches and missile did not violate the UNSC resolution.

It is worth remembering that Riyadh is involved in a tough fight with Iran in the region and does not appear anywhere close to victory. An example is of the unending war in Yemen where Tehran backed Houthi forces have been fighting back strongly, pushing Riyadh-led alliance to the brink of defeat. Moreover, Riyadh has achieved no positive results from its adventures in Syria, Lebanon, and even Iraq.

Israel is happy with Saudi Arabia on its side against Iran whom the Jewish state regards as a potential threat to its sole nuclear capability in the region. Tel Aviv always opposed the JCPOA as it was doubtful of Tehran’s commitment to act upon the agreement. Israel played well to contain Iran’s influence in Syria but there has been no desirable success.

As America has declared that it has been withdrawing from Syria as well as from Afghanistan, Iran can feel encouraged and its influence in the region can rise. Washington’s planned exit from both the war-torn countries can be counted as Tehran’s victory because the Taliban are undefeated and Iran is still in Syria.

That said, Riyadh and Tel Aviv are likely to increase their intimacy in order to contain Tehran’s growing power, confidence, and dominance in West Asia and even beyond. Particularly, America’s exit from Syria is a setback to both Saudi Arabia and Israel as they have close relations with Washington and see it as their savior and strength. The two countries use this leverage to increase their influence and play a prominent part in the region.

Israel’s close ties with Saudi Arabia and other Gulf countries can bring FDI and stimulate trade relations, thereby offering economic benefits to the country. A good relationship with Riyadh is thus important for Tel Aviv from an economic perspective. Besides, America has a special interest in Israel-Saudi entente as it helps to form a joint front against Iran.

Furthermore, good relations with Saudi- the guardian of Islam’s two holiest sites and a de facto leader in the Sunni world- can enable the Jewish state to resolve the long-standing Palestine conflict as per its wishes. As a result, Israel will continue to deny rights to the Palestinians while controlling the Palestinian territory.

The added advantage of good relations with Saudi Arabia for Israel is to prevent the emergence of democratic feelings and forces in the Arab states, thus presenting itself as a shining city upon a hill.

Riyadh also seeks to prevent the democratization of the regional countries so that its own interests and the way of governance are never questioned. If democratic forces emerge in Saudi Arabia, the regime is likely to face criticism and rebellion. Riyadh has never supported the idea of democracy over despotism. During the Arab Spring of 2011, Riyadh felt threated and suppressed the nascent democratic spirit and forces in the region.

Washington knows well that its ‘maximum pressure’ on Iran has yielded minimum results, thus necessitating a regional alliance which can contain and curtail Tehran’s influence in West Asia and beyond. Such an alliance is easily available in the shape of Saudi Arabia and Israel, both of whom see Iran as their key adversary in the region.

In the ultimate analysis, what can be concluded is that Tehran’s strained relations with the US and the goal of regional dominance are instrumental in pushing Israel and Saudi together. Both the countries seek to weaken Iran to achieve their strategic goals.