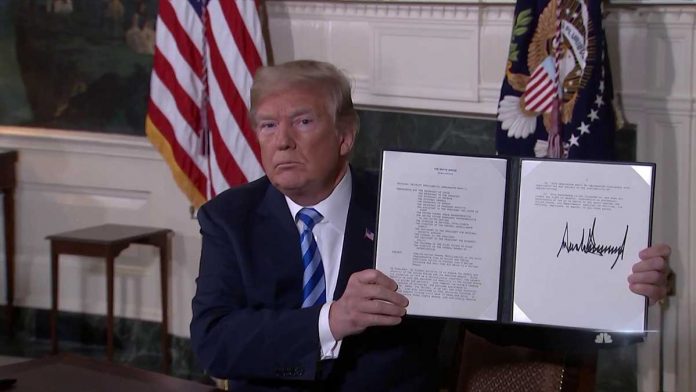 The Supreme Leader of Iran, Ali Khamenei, delivered a speech to loyal followers of the Iranian government on 9th May 2018. Halfway through (and again at the end), the speech was stopped due to rapturous enthusiasm and approval by the crowd, proclaiming ‘Death to America! Death To America!’ This on first sight can be passed off as the crowd responding in a way they believe their leader would approve of, but it could also be the genuine sentiment of the Iranian people showing disapproval at the US withdrawal from the Joint Comprehensive Plan of Action (JCPOA) and re-imposing sanctions on their country.

In the address, the Supreme Leader stated that “I said many times from the first day: don’t trust America”, he also stated his disapprove of Britain, France, and Germany; “I don’t trust these three countries”. He further gave a glimpse into his own thoughts on the future of a new deal by stating “If you can’t get a definite guarantee, then the nuclear deal cannot be continued”[1]. Similarly, the Islamic Consultative Assembly or the Iranian Parliament approved a $500 million increase in the country’s military budget for the coming (Persian) year[2]. This, as one might expect was followed by the burning of the American flag and further calls for ‘Death to America!’

Hostile response from the Iranian people as well as from their  government is understandable and expected. The shock appears both to Iran and other Western countries (Britain, France, and Germany) that the JCPOA has abruptly come to an end (this time not via a tweet) at a press conference. It has placed many questions on whether this deal can be continued if indeed the deal survives without U.S support, and what the consequence this will have for the Middle East and indeed for the world.

I previously wrote a piece for Balanced Opinion entitled The ‘Benefits’ of Conflict with the Islamic Republic[3], in that piece I explained that war with Iran would be a pointless endeavour for Western countries, it would rather directly benefit the strategic and geopolitical goals of Saudi Arabia and Israel. I will continue further with this line of thought but let me be clear. I do not believe that Trump is the sole arbiter of the current crisis; rather I believe that the American State apparatus (sometimes referred to as the ‘Establishment’ or the ‘military-industrial complex’) has orchestrated this move against Iran. I will now proceed to go into more detail on this point.

The ascension of John Bolton to the position of National Security Advisor in the Trump Cabinet has created a lot of concern. He is known as a war ‘hawk’ and a committed supporter of Israel. Bolton’s impact on the Trump Presidency has already been felt with the missile strikes on Syria but more concerning for the developing situation with Iran. Bolton has threatened European countries with sanctions if European countries and their corporations do not take President Trump’s lead in canceling the JCPOA and imposing sanctions on Iran[4]. But the extent to which European countries will yield to American pressure is, in my opinion not a reality. Europe strives to become a regional and indeed a superpower capable of standing against both America’s and China’s economic and military power. President of the European Commission, Jean-Claude Juncker has stated that the EU should replace the US as the world’s leading superpower[5]. Thus, I will be surprised if the European countries abandon the deal with Iran. What further makes this challenging is Israeli strikes on Iranian targets within Syria (it is important to note that there is a dispute to whether the strikes were preemptive or in retaliation to attacks on the Golan Heights), which has caused tensions to rise and a potential for conflict to arise between Iran and Israel.

We must also consider the nature of America’s military-industrial complex. Last year the Trump administration announced an $80 billion increase in American military budget, bring the total to $665 billion[6]. It is thus clear that the increase in military spending and the current instability caused by the U.S. withdrawal from the JCPOA, the arms industry will gain immensely from this. Upon hearing that the JCPOA was to be revoked by the Trump Administration, stocks in both the defense and energy industry rose[7]. American arms contractors have received a boost in their stock price due to the Trump Administrations’ decision to withdraw from the deal. According to The Washington Examiner “Falls Church, Va.-based Northrop Grumman increased 3.7 percent to $328.84, while Raytheon rose 2.4 percent to $210.03, Lockheed Martin climbed 2 percent to $323.97, and General Dynamics added 1.8 percent to $199.93”[8]. Furthermore, the energy industry has also received an increase in oil prices, with Brent crude oil prices rose to a three year high at $77 per barrel[9] (at the time of writing, it stands at $72 per barrel). Thus conflict and instability is big business for arms and energy industry, giving rise to parties welcoming (more profit) the withdrawal of the U.S. from the Iran deal.

Finally, I want to add another dimension to this analysis. China will more than likely to buy up the Iranian oil if both the American and European countries pull out from the Iran deal. This will further expand China’s influence in the region and provide the much needed natural resource to sustain its economic growth and keep the Chinese Communist Party in power. Although the withdrawal from the JCPOA has been welcomed by Trump supporters, an increased Chinese influence within the region could cause problems for America’s foreign and strategic policy in the coming years. Thus, the short-term win from the withdrawal will only give rise to more concern and potential problems for the future foreign policy of the US.

If we believe that Iran is supporting terrorism and expanding its military reach, why would we (in the West) want a potentially nuclear-armed Iran in the next few years? On the other hand, the deal as Trump has argued has a ten-year period where Iran would be nuclear free, and at which point it could focus all its efforts on the development of ICBMs. Bit your face to spite your nose as the old British saying goes, nevertheless quite the conundrum? For me, Trump has highlighted a legitimate flaw in the JCPOA. By abruptly ending the deal, future talks on this point will be mired in mistrust and anxiety. Therefore, I believe the withdrawal from the JCPOA in the short term will be good for special interest groups like Israel and the military-industrial complex. In the longer term, the withdrawal will cause geopolitical instability and further introduce new players (namely China) into the Middle East.

[3] Balanced Opinion, 2017, The ‘Benefits’ of Conflict with the Islamic Republic – http://balanceopinion.blogspot.co.uk/2017/03/the-benefits-of-conflict-with-islamic.html

[5] The Daily Mail, 2018, EU chief say Europe must ‘replace the US’ as world superpower as he attacks Trump over Iran deal and accuses America of turning its back on allies, http://www.dailymail.co.uk/news/article-5709743/We-replace-United-States-EU-chief-attacks-America-turning-allies.html