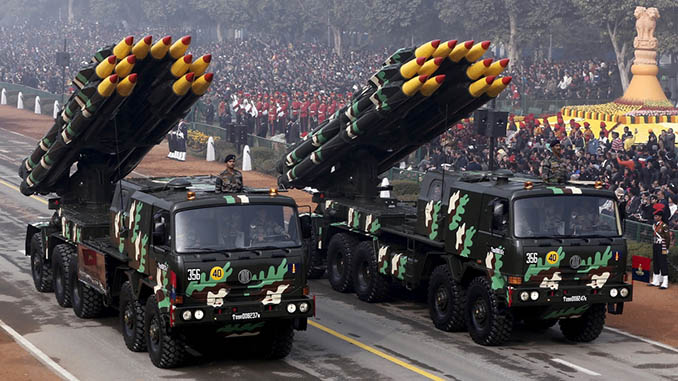 The possibility of a nuclear engagement between India and Pakistan is a ticking time-bomb waiting to explode in the geopolitical faultline of Indian Subcontinent. Delhi and Islamabad have fought four wars since 1947. Both the countries came close to nuclear confrontations after Kargil war and Indian parliament attack in 2001 by Pakistani origin militants.

A nuclear war between India and Pakistan will bring devastation and death beyond comprehension. Both countries now possess more destructive power than ever before. The effects of nuclear detonations will not be limited within the geographic confines of those two countries; every nation in the Subcontinent will feel the horrific pain of nuclear holocaust. A nuclear war would also bring economic recession and disruption of international trade and commerce.

“If India and Pakistan fought a war detonating 100 nuclear warheads (around half of their combined arsenal), each equivalent to a 15-kiloton Hiroshima bomb, more than 21 million people will be directly killed, about half the world’s protective ozone layer would be destroyed, and a “nuclear winter” would cripple the monsoons and agriculture worldwide.”

An additional two billion people worldwide would face risks of severe starvation due to the climatic effects of the nuclear war, according to a 2013 research paper by the International Physicians for the Prevention of Nuclear War.

India is working on a new military doctrine called “Cold Start”. It will allow Indian army to launch rapid conventional response or assault into Pakistani territory. According to the doctrine, India will be able to deploy five hundred thousand troops within three days. Pakistan is very concerned and unnerved about the doctrine. As Islamabad is economically and militarily much weaker than New Delhi, it will not prevail in a conventional war with Indian. Pakistani solution to the problem is– adoption of battlefield nuclear weapons. Pakistani military and government officials have stated that they will use tactical nuclear weapons to forestall the advancement of Indian troop into their territory. If necessary they will use those tactical devices on their own territory. Pakistan has reportedly accelerated its nuclear weapons program to counter cold start doctrine as well as to ameliorate its conventional weakness vis-à-vis India.

There are other destabilizing factors in the equation

Pakistan may use short-range Nasr missiles to deliver those battle-field nuclear warheads on Indian troops. Due to the short range of Nasr missiles, those tactical nuclear weapons must be kept close to Pakistan-Indian border which will make them vulnerable to Indian attack. As local military officers will be in command of the weapons, they will face a “use it or lose it” dilemma during an Indian armored offensive. Considering the risk, Pakistani military would scatter and disperse its tactical nukes in different locations to maximize their survivability. Consequently, terrorists and militants might easily gain control of some of the Pakistani battle-field nuclear weapons. A scenario of this kind is deeply worrisome and troubling.

Fifty-three percent of Indian nuclear warheads are mated with Prithvi and Agni ballistic missiles. There are also twelve warheads mounted on Sagarika SLBMs. India would need fewer nuclear warheads and missiles to cover Pakistani territory as it is a smaller state. It would be logical for India to target major Pakistani cities like Lahore, Islamabad, Karachi, and Rawalpindi as well as missile sites, cantonments, nuclear storage facilities, and command and control center.

Indian and Pakistani governments, as well as the international community, should come forward considering the grave danger of a nuclear engagement. The United States is in a good position to address the situation as it has the acceptability and influence over both of them. United States’ good office can facilitate peace talks, confidence-building measures, the establishment of a deconfliction mechanism and a direct military to military hotline to avoid a doomsday-like scenario.