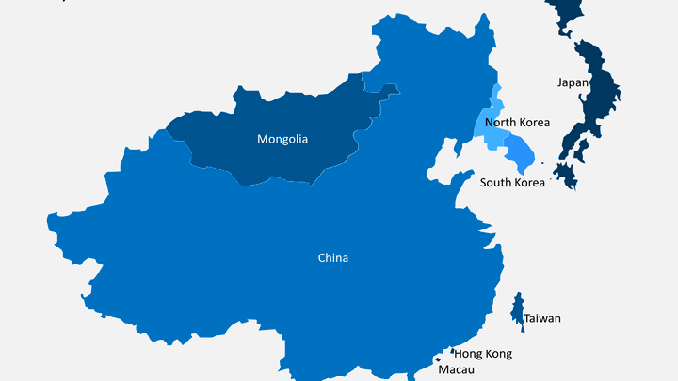 The next great game of geopolitics will be staged in the theater of East Asia and the Western Pacific. Since the end of the Second World War, the United States has embraced an ambitious policy of liberal hegemony and global primacy. After the disintegration of the  Soviet Union; the US has emerged as the unrivaled superpower in the world in terms of military, economy, diplomacy and politics. East Asian Security largely depends on the relations between the two giants- China and America.  Now, Washington is at the end point of nearly three decades of its unipolar moment. Our old familiar world is getting multipolar with each passing day.

Although the United States is still overwhelmingly powerful in terms of military, it has lost its unchallenged economic position in the world. In recent times, globalization, information technology and the open market have diffused wealth across the continents; resulting in a multi-polar word in reference to economic capability. A Strong industrial, as well as an economic base, enables a state to finance a huge, technologically advanced and sophisticated military; capable of projecting power in high seas and in faraway lands.

The truth is, the United States is not lagging behind, but others are catching up rapidly. China has dramatically improved its economic and military gap with the West during the last three decades of its stellar economic growth. Beijing is soaring up, shattering the century-old status quo in the Asia-Pacific. Status quo in the international system is primarily determined by the distribution of capabilities. Changes in the distribution of powers and capabilities would upset the existing power relations and consensus; contributing to an intense security competition, uncertainty and instability in great power relations.

For a long time, East Asia strides over the two explosive geopolitical fault lines namely– Taiwan and North Korea. A flash in any of the fault lines could set the East Asian security architecture ablaze. In the coming days, the temperature of East Asia would be increased with the security competition between China on the one hand and the United States, Japan and South Korea on the other hand. It would be a big challenge for strategic thinkers around the world to devise a pragmatic solution to the problem of East Asian security and to diffuse the air of tension.

To get a better alternative, sometimes, we must think of unthinkable. The United States and China would be better off if they trade Taiwan and North Korea with each other. The bottom line is, Washington would allow China to take Taiwan in exchange for North Korea’s integration with South Korea. In the first scenario, Washington must ensure that Taiwan will be granted greater autonomy and continued democracy after its reunification with China. In the second scenario, to reassure Beijing, Washington must promise that after the unification of North and South Korea; it will withdraw all of its military forces from the Korean peninsula. Thus, the elimination of the sources of conflict would dampen arms race and security competition and foster an atmosphere of trust and patience.

To make it a reality, both the countries have to fight with a lot of internal and external opposing forces. A Chinese-American confrontation over Taiwan or North Korea has a potential of escalation to the point of nuclear exchange. A thermonuclear war between the US and China may cause the human race to become extinct like the dinosaurs. So, the objective is worth pursuing, though it would take a herculean effort to overcome the mounting odds and differences. For the greater good of the humanity as well as for the East Asian security and stability, two sides must find a suitable avenue to cooperate and devise a plan to dismantle the ticking time bombs waiting to explode. A radical approach like this to settle the issues would be a win-win situation for both parties involved. After all, geopolitics is not always that zero-sum.