AAGC Cannot Counter BRI but It Can Act as a Complementary

India is afraid of losing influence over its South Asian neighbours and is trying to counter Chinese Belt Road Initiative (BRI). While China is engaging itself with different infrastructural projects both in South Asia and the entire globe, India is attempting to counter it in South Asia through political intervention. This is making India unpopular in Bangladesh, Nepal, Maldives and Sri Lanka. Bangladesh’s Prime Minister Hasina is trying to hang on to power by eliminating opposition leadership with the support of India. Nasheed the former defeated President of the Maldives seeking Indian military intervention in his country. In Nepal pro India Deuba was trying to elongate the process of handing over the political power to the new elected Communist alliance.

Now the question is why India is not countering China with economic clout. China is growing for last 35 years at a with a very high rate currently at 6.9%. It has become the largest exporter and manufacturing hub of the world. China holds foreign exchange reserves of value $ 3.1 trillion. Almost 70% of foreign exchange reserves come from current account surplus i.e. earned from foreign exchange. China exports value of nearly $80 billion to India last year and it is just 2% of the entire export of China. India though maintaining a 7% growth rate on average for last twenty years, its growth is not export-led and mainly foreign debt led. India has huge current account deficit and trade deficit. Its $400 billion foreign exchange reserve mainly comes from capital account surplus. India’s external liability is as much as $ 1.4 trillion. Its export basket still consists of low-value goods. It needs immediate reforms for more flexible land and labour laws. But political interests always come to stall reforms that can make Indian production competitive in the global market. Indian higher education previously got much respect at the global level but recent vote bank based reservation politics is gradually eroding its strength in higher education too. China has a huge excess capacity which is searching demand outlet in forms of infrastructural investments at home and abroad. International forums like Asian Infrastructural Investment Bank (AIIB) and Silk Road Fund were formed to shape BRI through which huge China will go for huge infrastructural spending. India on the other hand, is still a supply constrained economy. It has no earned foreign exchange to spend on its own infrastructure and abroad.

India and Japan decided to launch Asia Africa Growth Corridor (AAGC) to counter BRI. AAGC like BRI seems to be about infrastructural development across Asia and Africa. Though India does not have deep money pocket, Japan has. So it is assumed that Japan will finance infrastructure across Asia and Africa to geopolitically counter China’s BRI. But is this feasible? E.g. Japan and India both can feel threatened by Chinese investment in Gwadar port in Pakistan. While Japan may try to counter influence by investing in Gwadar port, India will try to derail the project. So Japan and India though having common geopolitical enemy may not end up with the same strategy to counter it. Since Japan will have to spend most, it is difficult for India to determine the course of AAGC projects.

Similarly, can man-power of India and Japanese technology unite to counter the power of China? Labour and Technology together can do splendid jobs only if they are economically viable. Japan is trying to lure Indian high-tech professionals with jobs inside Japan, but not many Indians are attracted to it. This is because though India has an abundant young population not many of them are high-tech professionals. So few high-tech Indians have good jobs in India or in English speaking countries and they have no urge to work in Japan. Therefore, Japan has to offer unskilled jobs to lure Indians. But Japan does not seem to be ready to allow low skilled Indians inside their islands. Another point is, does Japan have the might to counter BRI? Though at present Japan has a huge foreign exchange reserve of $2.9 trillion, Japan’s economy has been stagnant for past 27 years and hence the difference between GDP of China and Japan is growing every year.

By 2025, the Chinese economy will be almost 5 times the size of Japan. So fund allocation power is already in China’s favour and it will grow over time. Moreover, China being a Socialist country the Communist Party manages the program of allocation of resources. Thus, China can allocate a lot of resources in building infrastructures which have long gestation periods and often non-profitable. E.g. Chinese credit to Zimbabwe and Venezuela did not prove to make profits but China goes on funding these countries simply because that creates demand for its manufacturing sector that is facing excess capacity. Japan being a liberal democratic country, private profit motive is above everything else and hence nonprofitable projects would be discouraged. This is true for any liberal democracies. Thus for India, it is impossible to counter BRI using USA or Australia or Japan. 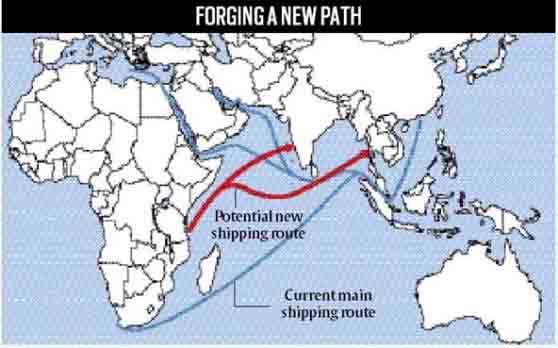 The proposed AAGC route illustrated on a map. 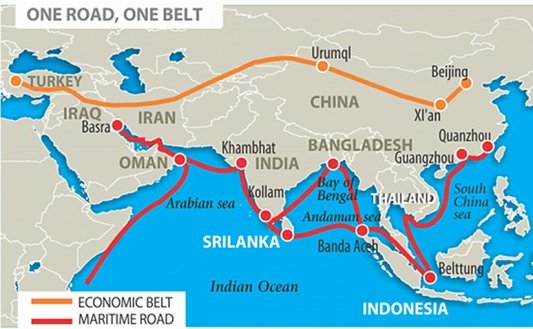 The Chinese initiated BRI route illustrated on a map.

But if we look at the maps of AAGC and BRI, it is clear that the focus of AAGC in India is Mumbai while the focus of BRI within India in Kolkata. This can be explained in two ways:

Indian ruling class mainly consists of West Indian capitalist class and Gangetic Plain politicians. Thus Mumbai is financial capital and Delhi is political capital of India. The ruling class thus always seek Mumbai centric South Asian economic development. China, on the other hand, finds Kolkata as the inter-linkage between India, China and ASEAN. Thus Kolkata is China’s natural option.
Similarly, for Japan Mumbai is lucrative since it is already the financial centre of South Asia and so investments near its vicinity will be profitable. China, on the other hand, thinks long-term investment with long gestation periods in Kolkata today will make its most important economic centre of South Asia in the near future. We must be aware that fall of China as largest producer and exporter after Opium Wars is associated with fall of the importance of Kolkata and rise of Mumbai. So re-emergence of China since 2008 as world’s largest manufacturer and exporter will bring Kolkata to the centre stage again. China knows that and wants to develop Kolkata and its vicinity with such long-term goal.
The most important conclusion here is that AAGC and BRI can be complementary to each other. While AAGC can concentrate on developing profitable infrastructures of already developed Western India, BRI can engage with de-industrialized Kolkata to develop long gestation period infrastructures across less industrialised Eastern India. Even Bangladesh, Nepal and Bhutan will be greatly benefited from Indian acceptance of BRI.

Above all, acceptance of BRI will give India more say about other BRI projects including CPEC through Pakistan about which New Delhi has shown opposition. But negating itself completely from BRI, the most prominent economic activity right now on global stage, is foolish.

Another cause why New Delhi is so much against BRI is that development of Kolkata may give rise to a new power structure in Eastern India that will challenge Delhi-Mumbai centric Indian ruling class. But then Indian ruling class is ending up preventing the development of India itself. Such mindset will only make India more foreign debt led economy which will definitely fall into social, economic and political contradictions in the near future.

The article was first appeared on the Qutnyti.

China, now equipped with its third aircraft carrier Fujian, can use it to coerce claimant states in the South China Sea (SCS) dispute. Vietnam,...
Read more

Cost and Affordability of a Healthy Diet in India

The UN-FAO report, “The State of Food Security and Nutrition in the World”, published in 2022, highlights certain glaring concerns with global hunger and poverty that...
Read more

The Tenth NPT Review Conference: A Prospect for a Peaceful Nuclear-Free World?

More than 50 years have passed since the Non-Proliferation Treaty had been signed, and the world has not experienced any nuclear catastrophe thereafter. However,...
Read more