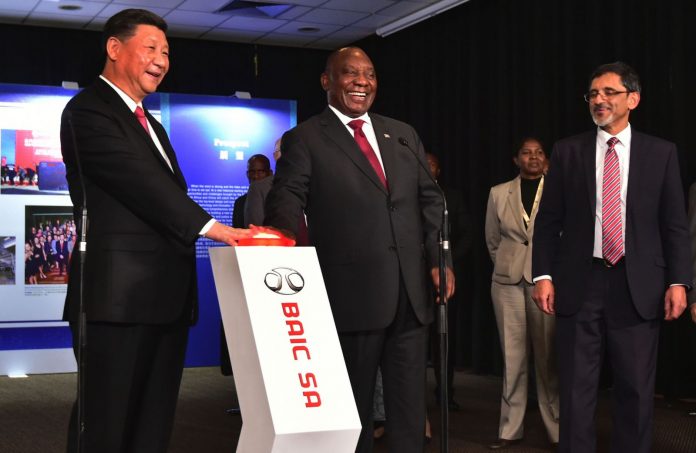 On December 13, 2018, US National Security Advisor (NSA), John Bolton while speaking at the Heritage Foundation highlighted the key aims and objectives of ‘Prosper Africa’ which could be announced at a later date. The emphasis of this policy according to Bolton, would be on countering China’s exploitative economics unleashed by the Belt and Road Initiative, which leads to accumulation of massive debts, and has been dubbed as ‘Debt Trap Diplomacy’. A report published by the Centre for Global Development (CGD) examined this phenomenon while looking at instances from Asia as well as Africa.

During the course of his speech, Bolton launched a scathing attack on China for its approach towards Africa. The US NSA referred to, “bribes, opaque agreements and the strategic use of debt to hold states in Africa captive to Beijing’s wishes and demands”. Bolton, apart from attacking China, accused Russia of trying to buy votes at the United Nations, through the sale of arms and energy. He also alluded to the need for US financial assistance to Africa, being more efficient, so as to ensure effective utilization of the US taxpayers money.

It would be pertinent to point out that the Trump administration, while realizing increasing Chinese influence in Africa, set up the US IDFC (International Development Finance Corporation) which will facilitate US financing for infrastructural projects in emerging market economies with an emphasis on Africa. IDFC has been allocated a substantial budget of $US 60 bn. In October 2018, Trump had signed the BUILD (Better Utilization of Investments leading to Development) initiative because he along with many members of the administration, felt that the OPIC (Overseas Private Investment Corporation) was not working effectively, and had failed to further US economic and strategic interests. Here, it would be pertinent to mention that a number of  US policymakers, as well as members of the strategic community, had been arguing for a fresh US policy towards Africa.

Two key features of IDFC which distinguish it from OPIC are; first, under IDFC deals and loans can be provided in the local currency so as to defend investors from currency exchange risk. Second, investments in infrastructure projects in emerging markets can be made in debt and equity.

There is absolutely no doubt, that some African countries have very high debts. Members of the Trump administration including former Secretary of State, Rex Tillerson had also raised the red flag with regard to the pitfalls of China’s unsustainable economic policies and the ‘Debt Trap’.

According to the Jubilee Debt Campaign, the total debt of Africa is well over $US 400 bn. Nearly 20 percent of Africa’s external debt is owed to China. Three countries which face a serious threat of debt distress are Zambia, Republic of Congo and Djibouti. The CGD report had also flagged the precarious economic situation of certain African countries such as Djibouti and Ethiopia.

What US policymakers need to bear in mind

Beijing has made efforts to send out a message that BRI is not exploitative in nature, and that China was willing to address the concerns of African countries. Chinese President Xi Jinping while delivering his keynote address at the China-Africa Summit in September 2018, laid emphasis on the need for projects being beneficial for both sides, and expressed his country’s openness to course correction where necessary. While committing $US 60 bn assistance for Africa, the Chinese President laid emphasis on the need for a ‘win-win’ for both sides.

African countries themselves have not taken kindly to US references to debt caused as a result of China. While Bolton stated, that Zambia’s debt is to the tune of $US 6 bn an aide to the Zambian President contradicted the US NSA, stating that Zambia’s debt was a little over $US 3 bn.

At the China Zhejiang-Ethiopia Trade and Investment Symposium held in November 2018, Ethiopian State Minister of Foreign Affairs Aklilu Hailemichae made the point, that Chinese investments in Ethiopia have helped in creating jobs and that the relationship between China and Ethiopia has been based on ‘mutual respect’. The Minister also expressed the view that Ethiopia would also benefit from the Belt and Road Initiative.

During the course of the Forum of China-Africa cooperation in September 2018, South African President, Cyril Ramaphosa had also disagreed with the assertion, that China was indulging in predatory economics and this was leading to a ‘New Colonialism ‘ as had been argued Malaysian PM, Mahathir Mohammad during his visit to China in August 2018.

Washington DC needs to understand, Beijing will always have an advantage given the fact that there are no strings attached to its financial assistance. To overcome this, it needs to have a cohesive strategy, and play to its strengths. Significantly, US was ahead of China in terms of FDI in Africa in 2017 (the US was invested in 130 projects as of 2017, while China was invested in 54 projects). Apart from this, Africa has also benefitted from the AGOA program (Africa Growth and Opportunity Act) which grants 40 African countries duty-free access to over 6000 products.

Yet, under Trump, US adopts a transactionalist approach even towards serious foreign policy issues (the latest example being the decision to withdraw US troops from Syria) and there is no continuity and consistency in its policies.

The US can explore joint partnership with allies

In such a situation, it would be tough to counter China, unless it joins hands with Japan, which has also managed to make impressive inroads into Africa, in terms of investments, and has also been providing financial assistance. Although Japan is more cautious than China and has been closely watching the region’s increasing debts. Japan and India are already seeking to work jointly for promoting growth and connectivity in Africa through the Africa-Asia Growth Corridor. The US is working with Japan and India for promoting a free and open Indo-Pacific and can work with both countries for bolstering the ‘Prosper Africa’ project.

Perhaps, President Trump should pay heed to the US Defence Secretary Jim Mattis’ advice where he has spoken about the relevance of US alliances for promoting its own strategic interests.

Then, there are those who argue that the US should find common ground with China for the development of Africa and not adopt a ‘zero-sum’ approach. In the past, both sides have sought to work jointly.

African countries will ultimately see their own interests, mere criticism of China’s economic policies, and the BRI project, and indirectly questioning the judgment of African countries, do not make for strategic thinking on the part of the US. The key would be to provide a feasible alternative to China, along with other US allies, or to find common ground with Beijing. Expecting nuance and a long-term vision from the Trump Administration however is a tall order.

Image Credit: President Cyril Ramaphosa hosts President Xi Jinping of the People’s Republic of China on a State Visit to South Africa by GovernmentZA, is licensed under CC BY-ND 2.0.